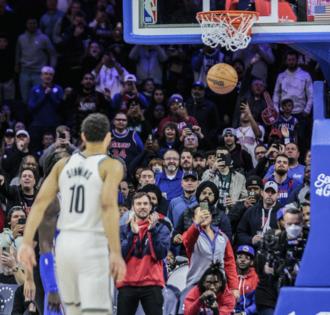 PHILADELPHIA — Loser energy is a difficult thing to overcome. One team had it. The other team had the opposite. Ben Simmons and two future Hall of Famers were on the first team. James Harden and Joel Embiid were not on the second. Somewhere within all of those facts is a lesson.

They say that the NBA is a star-driven league, and it is. A team can win a lot of games playing the brand of basketball that the Sixers played in a 115-106 win over the Nets on Tuesday night, but it won’t win any championships. That’s as close to a universal truth as it gets, whatever the purists would like to believe. Doc Rivers knows it. Daryl Morey knows it. Embiid, Harden, Kevin Durant, Kyrie Irving — all of them know it. Simmons probably knows it, whether or not he cares.

Energy. Pace. Physicality. Will. Synergy. Put them in a package and call it whatever you like. That is why the Sixers were able to overcome the absence of their top three scorers against an opponent that featured two of the top scorers in the sport. It is why they were able to overcome an eight-point first-quarter deficit and blitz the Nets on both ends of the court. For 48 minutes, they never slowed down. They never stopped.

“It’s contagious,” said Tobias Harris, who scored 24 points on 10-of-21 shooting and carried a heavy load in the second half. “When the ball is moving like that and it touches everyone’s hands, it allows guys to get more in the flow out there and have more confidence and let the ball go and shoot it like they know how to shoot it.”

The Sixers played like a contagion. You could almost see the transfer of energy from one player to another. Forty seconds into the second half, Harris limped off the court and into the locker room. Five minutes later, he was throwing down a dunk off a pass from Shake Milton. A few possessions later, Milton was knocking down a 27-foot 3-pointer that ended an 8-0 Nets run and put the Sixers back in front. There was Paul Reed, grabbing a defensive rebound and then getting three second-chance points on the other end of the court. His free throw gave the Sixers an 83-79 lead. They never trailed again.

There are times where the only thing they seem to have in common is their uniforms. That wasn’t the case on this particular night. They were something much greater than five similarly dressed individuals. They played with no boundaries. They covered the court in blue.

That wasn’t the case for the other team. This was a night that was supposed to be about Simmons. In some ways, it was. If a guy plays against his old team, but his old team isn’t there, does it really count? Turns out, the answer is, well, kind of.

The juicy stuff was dead on arrival. The absence of Embiid, sidelined with a foot injury, eliminated most the comeuppance the Sixers had to deliver. The absence of Harden limited their ability to show Simmons how thoroughly they’d moved on. There were plenty of boos, but they did not match the intensity of those that had greeted the Sixers’ former No. 1 overall pick when he returned last season in street clothes. The vitriol registered something more than obligatory, but something less than homicidal.

Simmons is never not going to be a thing when he comes to Philadelphia, mostly because he is the sort of person who needs to be a thing. Which is baffling, because he is also the sort of person who doesn’t know how to be it. After hitting a pair of free throws in front of the booing crowd, he mimicked Michael Jordan’s famous palms-up shrug. After getting hit by a Georges Niang forearm that drew a flagrant foul, he averted eye contact and walked back to his bench, and only then started jawing. Most of the great ones project an immunity to their surroundings that Simmons simply does not have. Some people can dance like nobody’s watching. Others don’t have it in them.

This was almost a year ago, a time when the transfer portal and name, image and likeness deals were just gaining traction in college athletics.