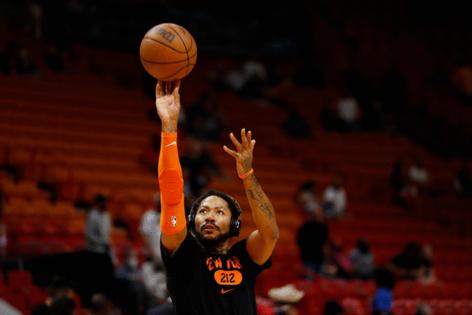 After so many years and so many injuries, the point guard listens to his body and has a reluctant Knicks staff buying into his philosophy of “Trust me, bro.”

“And they’re like, ‘Woah, what the hell you mean just trust you? We can’t just throw you out there,’” Rose said. “But when I go out, they see and say, ‘He knows what he’s doing.’ I’ve been injured so much.”

Rose is scheduled to appear in his first game in over nine months on Tuesday, the same day he turns 34 years old. His play off the bench is among the most notable storylines of the preseason opener against the Pistons, even if Rose’s minutes are limited.

The point guard hopes to spin it forward to a healthy season. He hasn’t played more than 66 games since his MVP campaign in 2010-11.

Rose missed the final 56 games of last season following ankle surgery, which became a bigger issue after an infection in the incision area filled his leg with pus.

Since Rose long ago shunned pick-up games in the offseason, the Knicks’ standard recovery progression of 1-on-0 to 1-on-1 to 2-on-2, etc., didn’t apply.

“I like just jumping back into the game,” Rose said. “The staff is kind of nervous when they’re not there that the first time I was here or the second time I was here, because it’s kind of unusual. But I feel like I’m a gamer, like I’ll figure it out. It’s not like I’m running 100 miles an hour like I used to. I kind of tailored my game to what it is now. I’m just trying to keep people off my body, and I’m shooting a lot.”

Indeed, Rose’s offense now includes more deliberation and outside shooting. Over one-third of his shot attempts last season were from beyond the arc. He averaged just 1.2 free throws per game — a career low — suggesting Rose wasn’t attacking the rim with the same frequency.