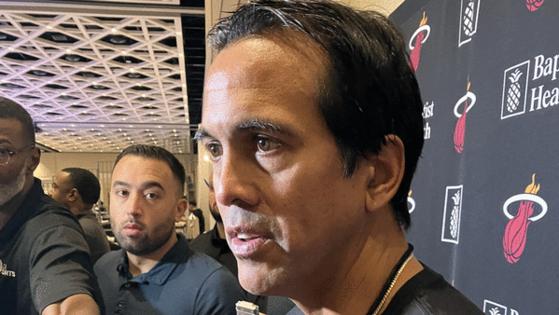 The embraces of breast-cancer survivors at midcourt during halftime of the intrasquad scrimmage is as heartfelt an instant as any during the course of the season.

Monday’s 6:30 p.m. event at FTX Arena will be even more heartfelt for Spoelstra ahead of his 15th season guiding the team.

“Of course it will,” he said during a private moment at training camp.

This summer, the oldest of Spoelstra’s three children, 4-year-old Santiago, completed treatment for Burkitt lymphoma, a type of non-Hodgkin lymphoma, a cancer of the lymphatic system.

The illness and subsequent remission was revealed in July in an Instagram post by Spoelstra’s wife, Nikki, that read, in part:

“The day after his fourth birthday, our son went in for an unexpected surgery. Intussusception.

A mass was found. ‘Benign’ I thought to myself. It has to be benign.

“One week later, he was diagnosed with Burkitt Lymphoma. In the days, weeks, and months that followed… he endured (and thrived through) Chemotherapy.

“He was… and continues to be.. so brave. He did not lose his joy. So many friends and loved ones made sure that none of us did.