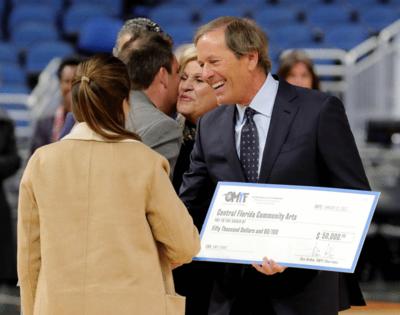 And then as he watched the footage of the devastation and the destruction of the homes that were ruined and the lives that were taken by one of the worst storms in history, DeVos, his family and the Magic did what they do best.

They opened their hearts — and their wallets.

The DeVos Family Foundation on Friday donated $1 million to assist with Hurricane Ian relief efforts in Central Florida and across the state.

“Everyone was expecting the worst and praying for the best,” DeVos told me Friday evening. “Sadly, though, we expected the worst and got the worst in this case. We all need to pitch in and do what we can do to help the relief effort.”

And what sports franchises and their owners do is they use their wealth, their clout and their fame to help fund the recovery.

We saw it firsthand right here in Orlando in the aftermath of the mass shooting at the Pulse nightclub six years ago. The Magic and Orlando City quickly stepped up to lead the effort to raise money for the city-sponsored OneOrlando Fund to aid the victims of the tragedy.

“We have a network of teams and leagues in this community and throughout our entire country who stand ready to use the power and forum of sports to help us rebound from this tragic situation,” Martins said then as he spearheaded the campaign that raised more than $30 million for OneOrlando Fund.

It looks like we are seeing the genesis of the same sort collective effort now. Like the DeVos family in Orlando, the Glazer family — owners of the Tampa Bay Buccaneers — donated an initial contribution of $1 million on Thursday to help hurricane victims in southwest Florida. The NFL has since matched the Glazers’ donation, and I wouldn’t be surprised if the NBA does the same with the DeVos donation.