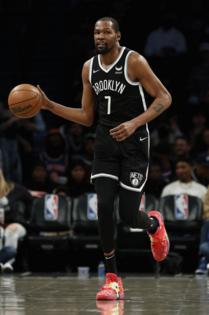 Durant, who requested a trade twice in the offseason and reportedly asked team owner Joe Tsai to fire both general manager Sean Marks and head coach Steve Nash, chose to stay put even though there’s overwhelming evidence proving superstars who want out can ultimately force their way.

James Harden, for instance, forced a midseason trade from Brooklyn to Philadelphia after forcing a trade from Houston to Brooklyn.

“[I came back because] I felt like we had a good team. I felt like this is a place that I said I wanted to be and we’re starting to set something up in the future to be a solid team,” he said after Day 4 of Nets training camp at the HSS Training Facility in Industry City on Friday. “So to be honest, I thought [Brooklyn] was still a great option, too. I didn’t want [the trade request] to get in the way of the games being played.

“I still love my teammates, I love playing at the Barclays. So I felt like regardless it’s gonna be an easy decision to come back and play because I love the hoop. This has been a good environment for me the last two years, even though I had some doubts, but overall, looking at it, I still like to come in here and get work in.”

Durant echoed the same sentiments shared by both Marks and Nash on Media Day. Durant met with Marks, Nash and Tsai after issuing the ultimatum, and the group cleared the air to help put the superstar forward’s concerns at ease.

On Media Day, Durant said he requested a trade because of a lack of accountability and championship culture in Brooklyn.

Durant — who said he expects to play in all four preseason games, though he doesn’t anticipate a heavy minutes load — was also complimentary of the roster moves the Nets made this summer. Marks’ offseason included trading for 3-and-D wing Royce O’Neale, signing T.J. Warren and Edmond Sumner, and re-signing both Nic Claxton and Patty Mills to two-year deals. The Nets also welcomed Ben Simmons (back) and Joe Harris (ankle) back from injuries. The roster additions were one of the reasons Durant felt comfortable returning to Brooklyn after wanting out.

“Oh yeah, we’re versatile,” said Durant. “We’ve got bigger guys. Last year in the playoffs we played a lot of smaller guys under 6-4; a lot of them played against a big team in the Celtics. I think we got bigger as a group overall. And we’ve got a lot of IQ in the building as well.

“Royce played in some playoff stretches. Ben obviously. Seth. So we’ve got some playoff experience in here that’s going to help down the line.”

The two-time Finals MVP and one-time NBA Most Valuable Player of the Year said he believes the team can be successful this season because they are entering training camp almost fully healthy.

“We look at it in the grand scheme of things, like we haven’t been healthy at all for two years,” he said. “It’s been, each playoffs, we’ve had major guys just miss minutes, like not just role players, guys that make a lot of money. So when you got $50 million on your bench this last playoffs with Joe and Ben, and then playoffs before that — I want to see what our team looks like in full with guys being healthy and us having a little bit of continuity. So we’ll see what happens.”