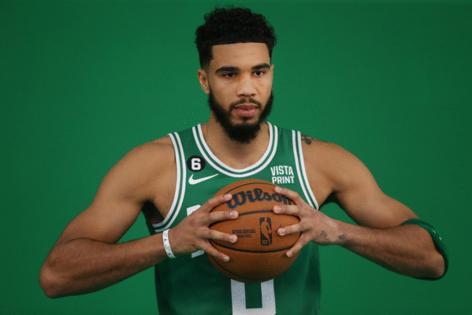 Jayson Tatum gets plenty of credit for his basketball ability, now an All-NBA player and considered one of the game’s best after he led the Celtics to the NBA Finals last season.

But the Celtics star may not be getting enough credit for his leadership.

As the C’s marched toward the NBA Finals last spring, Al Horford noticed a shift in Tatum.

“People probably don’t know this much but he was very vocal during the playoffs, right from the beginning,” Horford said. “Staying on us, challenging our group, and giving us certain things that he felt like we needed to do, and things like that.

“He took a huge step in my eyes. And I feel like that confidence is kind of gonna carry over this year and we’re gonna continue to see more of that from him.”

Through his first five seasons in the league, Tatum hasn’t always been the most outspoken. He hasn’t needed to, with more established voices taking up the locker room. But as he blossomed into one of the best players in the NBA and led his team to the doorstep of a championship, it seems like he’s recognizing the weight his voice can have.

“I feel like I’m very vocal,” Tatum said. “I might not be the loudest guy, especially in front of the camera, but for the guys in that locker room, when we’re in practice or on the plane or on the court, my presence is felt in my voice. We all put a lot into this game, so we all have the right to give input to each other. That’s all I try to do when I see something, try to help guys out.”

As the Celtics venture into some uncharted territory in the wake of Ime Udoka’s season-long suspension, as they begin a pursuit back to the Finals, Tatum’s continued growth as a leader could prove even more important. New coach Joe Mazzulla is emphasizing collaboration with his players as he tries to make them comfortable going into the new season.

Tatum feels like the C’s have picked up where they left off from last season through the first three days of camp.

“It doesn’t feel too much different,” Tatum said. “For the most part we’ve got the same group. A few new guys and a couple guys out, but the core guys have been playing for a while, so it feels natural.”

One of those guys out includes Rob Williams, who’s out 8-12 weeks as he recovers from left knee surgery. Tatum described that loss as “tough,” but they know they have to find a way without him. Tatum is even willing to play some 4 in Williams’ absence if the C’s decide to play smaller.

Without Williams, who was instrumental in the Celtics’ defensive turnaround last season, Tatum knows they need to stick to their defensive principles.

“(We have to) understand that we have five guys last year get an All-Defensive vote and that’s contagious,” Tatum said. “Everybody takes pride in guarding their yard, and obviously, we’ve got to help each other out. That’s where we gotta hang our hat on, especially trying to be the best defensive team in the league this year.”

CHICAGO — Javonte Green missed a second straight game Wednesday for the Chicago Bulls, but coach Billy Donovan assured Green he will regain his newfound starting job at power forward whenever he is cleared to return to ...Read More

NEW ORLEANS — The Pistons, searching for some consistency, faced off against one of the best teams in the NBA on Wednesday night.

The New Orleans Pelicans, led by the quick and high-flying Zion Williamson, stood in the ...Read More