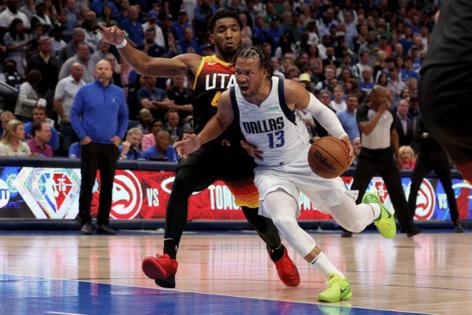 It’s not something he’s giving much credence to as he enters his first season with the Knicks, strapped with the type of contract that implies he’ll end the franchise’s long point-guard drought.

“For one, it’s not really pressure to me. I’ve played a long time,” Brunson said. “And two, I’m just gonna be myself. I’m ready to go. Whatever it takes.”

Brunson may not feel stress internally, but high stakes are attached to his success or failures. Reputations and jobs are on the line. After last season’s plunge out of the playoffs, the Knicks made Brunson their lone significant addition. It cost team president Leon Rose the 11th overall pick for cap space and $104 million to pry Brunson from Dallas. As Mavericks forward Dorian Finney-Smith said the other day about his former teammate, “You see how much money they gave him? I would have been mad if he stayed here.”

Brunson arrives without much NBA experience as a lead guard, but the Knicks have made clear their belief that the 26-year-old is worth the money. The logic, as echoed by coach Tom Thibodeau on Thursday, is Brunson is a leader who has won and improved at every level.

“Sometimes he can fool you because doesn’t necessarily look the part,” Thibodeau said, “but he is the part.

“His mind is spectacular, the way he sees the game.”

There are doubters, for sure. Brunson’s familial connections to this Knicks regime contributes to the ideas that not only was tampering involved, but also the point guard’s bank account benefitted from Leon Rose’s ‘Family and Friends plan.’

But Brunson is experienced in nonbelievers. He’s proven most of them wrong. After winning two NCAA titles at Villanova, Brunson’s size and athletic limitations dropped him to the second round of the 2018 draft to the Mavericks, who had picked Luka Doncic about an hour earlier.

Brunson played off the ball to accommodate Doncic in their three seasons together, then blossomed in this year’s playoffs when his superstar backcourt mate was injured. The postseason performance boosted Brunson’s free-agency value and Knicks gave him the ball. Older fans may have PTSD from signing a free agent based on a single playoffs — (ahem, Jerome James) — but Brunson has a track record of improvement beyond last season.

“I was just doing what I think I have the ability to do,” Brunson said of his playoff success. “Everyone else, the outside world, they just were able to see it at that point in time.”

Thibodeau has seen many NBA players defy the expectations of their draft position. He coached Jimmy Butler, who was taken 30th overall by the Bulls in 2011. He referenced second-round pick Draymond Green.

Brunson, up to this point, doesn’t stand up to those two but the Knicks are betting on his continued rise.

“It’s his DNA. He has a winning DNA,” Rose told James Dolan’s cable network. “You look at his history — state champions in high school, two National Championships in college, last year with and without Luka Doncic, leads the Dallas Mavericks to the Western Conference finals. And he’s improved every year because of who he is and what he’s about. …We needed that person that was going to stabilize us.”

Rose served as the agent of Brunson’s father, Rick, who is now a Knicks assistant coach. Rose’s son, Sam, now represents the younger Brunson. Beyond just the tortured Knicks fans hoping for their first championship since Richard Nixon was president, there are a lot of people inside the organization with personal stakes in Brunson’s performance. That might seem like pressure but the point guard said he doesn’t feel that emotion.

“I look at it — last season — as just another stepping stone to me getting better,” Brunson said. “It was Year 4, I made strides, now this is Year 5 and I have to continue to make strides. That’s all.”