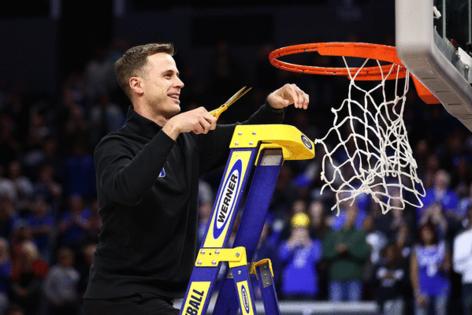 Jon Scheyer is a rarity among college head coaches.

Only three of the 68 head coaches who made the NCAA men’s basketball tournament last season were McDonald’s All-Americans as players.

A 2006 McDonald’s All-American and four-year player at Duke, Scheyer’s ability to relate to the players he recruits and coaches helps him on the job.

The 35-year-old is about to begin his first season as Duke’s head coach, succeeding Hall of Famer Mike Krzyzewski, who held the position for 42 years. Scheyer is able to have competitive shooting competitions with his players and is also adept at playing video games, sometimes beating his players.

“Me and his relationship is like this,” Duke guard Jeremy Roach said, demonstrating their close relationship by crossing his long fingers.

As the interim head coach for two games and part of a third due to the 75-year-old Krzyzewski’s health issues over the past two seasons, Scheyer has led the Blue Devils to three victories. But he has yet to record an official win.

“I feel like he’s also still figuring some things out, for sure,” Duke freshman forward Dariq Whitehead said this summer. “But he’s been doing a great job of, you know, not letting us see that, making it seem as if he’s been here and done that before. That makes us players confident to go out there and do whatever he asks.”

Expectations are high for such a young, first-time head coach, yet Scheyer has experienced a lot.

Because he was a highly-touted recruit himself, the Northbrook, Illinois, native understands the rigors of balancing playing basketball in the ACC while taking classes at Duke. And Scheyer spent more than a decade — as a player and then a coach — learning from one of the greatest coaches in college basketball history.

As part of Krzyzewski’s coaching staff from 2014-2022, Scheyer played a key role in landing some of the biggest recruits in the country — including Zion Williamson, Paolo Banchero and Cam Reddish (for whom he was the primary recruiter, according to 247Sports.com). With professional avenues like Overtime Elite and the G-League Ignite now available to athletes, Scheyer’s ability to continue to attract the top recruits in the nation is notable.