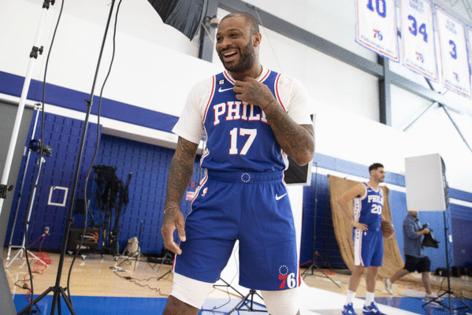 P.J. Tucker is 6-foot-5 and stumpy and balding. P.J. Tucker doesn’t jump all that high, which means that P.J. Tucker rarely dunks, if he dunks at all. P.J. Tucker sticks his elbow in your side and his butt in your crotch just for the sake of better rebounding position — subtle and sneaky, so you don’t know he’s doing it until you wince from the surprise and the quick stab of pain. P.J. Tucker grabs the loose ball from the faster player and the contested rebound from the taller player and takes and frequently makes open shots that leave you wondering how he got that open in the first place.

P.J. Tucker is Woody Harrelson rolling up to the playground in "White Men Can’t Jump" and the guy who has played lunch-break pickup at the Palestra for 40 years. P.J. Tucker is every meme of a chubby, middle-aged guy throwing no-look, backdoor passes and burrowing into the lane for layups against younger, flashier, gobsmacked opponents. P.J. Tucker is the guy you didn’t know you wanted or needed on your team until he beats your team.

There’s a YouTube video for everything, of course, and it takes next to no time to search the site for a 79-second refresher course on how Tucker and the Miami Heat old-manned the Sixers to death in Game 6 of last season’s Eastern Conference semifinals.

There he is, finding Max Strus for a naked three-pointer. There he is, muscling his way into the lane, inside James Harden, to tip in a missed jumper. There he is, snatching an offensive rebound away from Joel Embiid and dropping in a reverse layup. He finished Game 6, a 99-90 Heat victory, with 12 points and nine rebounds. Yet the manner in which he scored those points and collected those rebounds, the way he emboldened the Heat and demoralized the Sixers, made it feel as if he’d actually doubled those numbers.

For a franchise that prides itself on being analytically driven, the Sixers aren’t hiding that they sought the intangible benefits Tucker brings and were willing to pay a heavy price for them. They finalized a three-year, $33 million free-agent deal with him in July, and they are taking a big chance, at least on paper, by signing him to a contract that long and that expensive.

Mind you, they had to take that chance because they haven’t advanced beyond the playoffs’ second round since 2001, because Embiid is 28 and Harden is 33, and the time for patience has long passed for this team. But it would be disingenuous not to note the risks in relying so much on a player who already has 16 years of pro basketball under his belt, who underwent arthroscopic knee surgery just this summer, and who has entered that stage of his career when short-term offers usually are the best he can hope for or expect.

Tucker’s previous two contracts were a one-year extension with the Houston Rockets and a two-year agreement with the Heat, an indication of how much of an outlier the Sixers’ offer was.

“You have other teams that were interested,” Tucker said, “and somebody has to jump out there a little bit more to make it happen, and they did.”

They jumped out so far, in fact, that the NBA is investigating them for tampering. Tucker spent three-plus seasons with the Rockets after Daryl Morey had signed him there, and Morey is nothing if not an executive who trusts that a player who delivered for him in the past will do so again.

“We’re focused on winning, and, look, I think anyone who has counted out P.J. in the past has been wrong,” said Morey, the Sixers’ president of basketball operations. “Throughout my career, people back then wondered if he can contribute, and he’s been contributing at a high level for quite a long time. … We know that he can contribute in so many ways, both on and off the floor, that we’re confident over his time period he’s going to be a huge positive.”

What the Sixers want from Tucker, boiled down, is toughness, however one might define that term. In light of the Sixers’ recent history and one former player in particular, toughness might come down to nothing more than a willingness to shoot an open layup or jump shot, to not fear going to the foul line, and to show up for work. When asked what it’s like to play against someone like Tucker, someone with toughness, Sixers forward Georges Niang said, “Annoying.” Which, funny enough, is the same word one might use to describe playing with Ben Simmons. But we digress.

“I don’t know if I can give you an exact answer of what [toughness] is,” Tucker said. “I think it’s different for everybody. People see somebody make a mean face, and they think they’re tough. That’s not toughness. Like I said, it’s being accountable, reliable, not backing down. Every night, different assignments — doesn’t matter. Being available, not being hurt, being able to go out there and compete: There are so many different facets that go into being tough.”

The Sixers needed all of them. For $33 million, they need P.J. Tucker to be as old as he’s always been.