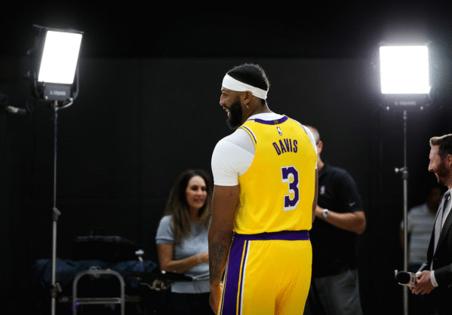 LOS ANGELES — Two of the best defenders of the last two decades of the NBA met Wednesday inside the Lakers’ practice facility, with Ben Wallace and Anthony Davis meeting up to … talk haircuts?

“He told me he liked my hair,” Davis said, pointing to his afro. “A headband, couple of wristbands and maybe I can win defensive player of the year.”

Davis’ afro is nowhere near Wallace’s at its peak, a haircut so high and robust that you almost forgot one of the NBA’s biggest, toughest centers wasn’t even 6 feet 10. His trophy room is also lacking — Wallace with four of the NBA’s DPOY trophies and Davis, maybe surprisingly without only one.

But as he enters a season with the Lakers wholeheartedly emphasizing defense under coach Darvin Ham, Davis said his goal wasn’t to be recognized as the NBA’s greatest player. Instead, he’s focused on just being its healthiest.

Considering his history, it’s certainly a lofty one.

Davis has played more than 70 games only twice in his career and hasn’t done it in any of his three seasons as a Laker. After playing only 36 games following the Lakers’ 2020 bubble title, he played only 40 games last season after freak injuries to his knee and foot.

“The last two seasons when you’re injured, it’s just hard to get into rhythm. You come in for a couple of weeks, three weeks, and then you’re out for six. It’s hard to establish a rhythm for me personally,” Davis said. “But I think that was the only thing. I always felt like myself, always confident, always ready to go and play. But I think when you’re in and out of the lineup consistently, it’s tough to catch that rhythm.”

He’s the centerpiece of the Lakers’ defense, with the team implementing a new system built around the team’s big men usually dropping in pick-and-roll coverage instead of switching onto or hedging against the offensive player.

“You can see the eagerness in his eyes,” Ham said. “Like, he wants to learn. He wants to be on the same page with everyone else in terms of how we communicate those coverages. So, it’s been good. It’s been really good.”