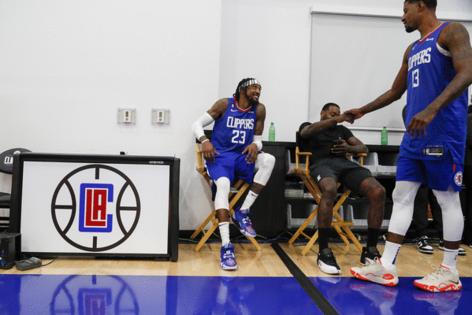 LOS VEGAS — Perhaps it was force of habit that when Paul George discussed how the Clippers could manage their deep roster's looming crunch for playing time Monday, the star forward called on using "the Team USA approach."

A decade ago when Paul visited UNLV's Mendenhall Center, it was to practice against a loaded USA Basketball roster working out the kinks of team-building before the London Olympics. In 2013 and 2014, George and the national team deep in talent and decorated with All-Stars used the university's practice facility to jell ahead of the world championships — and ditto in 2016, when the building was the backdrop for Team USA's Rio de Janeiro Olympics preparation.

George is back this week, and against a familiar backdrop comes a familiar mission: How to keep a roster that could have more qualified rotation players than available minutes most nights pointed in the same direction and win big.

"We should have the Team USA approach where you go hard for those minutes that you get," George said. "… Talent-wise I won't say we would compete with the top USA team, but talent-wise we're pretty special. If everybody just takes their minutes serious, we attack with 100 percent, and when we're tired, we ask for a break and know that we've got somebody behind us coming in to bring that same energy, I think it should be a lot of fun."

Keeping it that way will be a challenge of what coach Tyronn Lue called the team's willingness to sacrifice, and will also require tapping into what several Clippers called one of their greatest strengths: experience. Eight players who project to be part of the regular rotation have played at least seven NBA seasons and six at least 10 seasons.

"Where guys are at age-wise and mentally, hopefully we get to show a level of maturity this year because we know we have so much talent," guard Reggie Jackson said. "We know it could be anybody's night. We know coach is going to put in a great system for us to play."

Laden with veterans, the Clippers have enough self-awareness to understand that the team's hierarchy begins with George and Kawhi Leonard — whom Lue said felt good after participating without restrictions in both practices Tuesday — and opportunities for a championship such as this don't happen often.

"My window is shrinking to be a champion," George said.

Eleven Clippers have averaged at least 19 minutes per game during their careers, the kind of experience that can lead to expectations more will continue and chafing if it does not. It's one factor Lue will have to manage. Yet that same NBA longevity has brought something else — enough individual wealth, the Clippers suggested, to make chasing a championship a higher priority than chasing a contract. It's a different feeling, wing Nicolas Batum said, than being on a team of young players attempting to establish themselves. Of the projected main contributors, only Jackson will be a free agent after the season.

"I've made a lot of money in my career, that's really good, but it's not about the money," said wing Robert Covington, who re-signed on a two-year extension in May. "It's about like actually winning. At the end of the day, we always want to have that on the back of our resume."