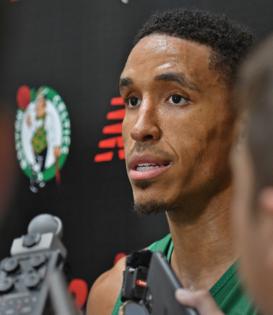 BOSTON — When Malcolm Brogdon was on the verge of being traded this summer, the Pacers gave the guard a few options to pick from before he ultimately decided on the Celtics.

The choice was relatively easy for Brogdon, who’s made it as far as the conference finals once — in 2019 with the Bucks — in his first six seasons.

“I picked Boston because I want to win,” Brogdon said earlier this week.

Joining a Celtics team fresh off an NBA Finals appearance and ready for another championship will come with some sacrifice for Brogdon, but he’s more than OK with that.

For three years in Indiana, the guard was one of the Pacers’ primary scorers. The last two years, though injuries limited him, he was their leading scorer. But with the C’s, Brogdon probably won’t even start, more likely playing a sixth man role and leading the second unit.

But Brogdon knew what he was signing up for. On Wednesday — two days into training camp — he called these Celtics the most talented team he’s played with. He’s not here to get in the way.

In what ways has Brogdon been trying to mesh with his new team early in camp?

“Being unselfish is one,” he said. “A guy like me that’s coming in here and not going to be the first or second option just being willing to sacrifice. I came from a team where I was a leading scorer, and guys know that. They know what I can do, they know what I did. So to come in here and be able to sacrifice and turn down shots to get a better shot and set these guys up, that shows a lot.”

That hasn’t seemed to be a difficult change for Brogdon, who’s comfortable being a small part of a larger sum even though he could easily be a top option elsewhere in the league.

“I think it’s about keeping everything in perspective and being honest with yourself, about where you are in your career, what type of players you’re playing with and what your real goal is,” Brogdon said. “Is your goal to make money? Is your goal to get a lot of stats and outscore people, or is your goal to win? At this point in my career, my goal is to win, and I’m going to do everything I can to make that happen.”

SAN ANTONIO — Being whole is not a luxury the Los Angeles Lakers have had during the early season, and not having Anthony Davis for Saturday night’s game against the San Antonio Spurs because of a bruised left calf ...Read More