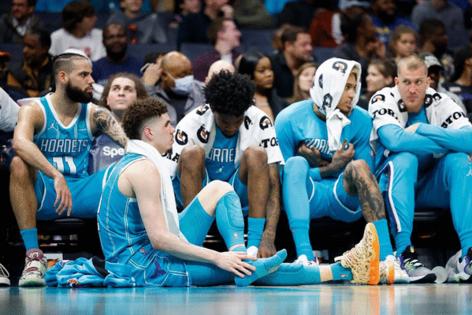 CHARLOTTE, N.C. — Kelly Oubre was describing the nuances of drawing contact on drives to the basket when he took a peek to his right and noticed LaMelo Ball waiting nearby.

“I think it’s just that refs see how we look, you know what I mean?” the Charlotte Hornets swingman said with a smile Tuesday while looking slyly in Ball’s direction. “They are like, ‘They are pretty boys, man. They’ll be all right. They can take a little beating.’ But man, we be getting fouled more than anybody else. It’s just what it is.”

Ball raised his game to another level in his second year, riding an improved statistical wave on the way to earning All-Star honors. He averaged 20.1 points, 7.6 assists, 6.7 rebounds and 1.6 steals per game, shooting 38.9% from 3-point range. He took a year-over-year leap in each of those categories.

But one area in particular remained unchanged for Ball: free-throw attempts. Ball unleashed just 3.2 attempts per game, matching the exact number of times he got to the line in each of the 51 games he appeared in during his rookie season.

Considering he knocked down 87.2% of his free throws — a big improvement from the 75.8% showing in 2020-21 — imagine if Ball mustered a few additional shots from the line per game.

“If you want to look at his offensive efficiency, there are a couple things that are not major, major things that he knows he can do,” coach Steve Clifford said. “For instance, he is terrific at getting to the rim and does not get fouled a lot. That is one of the things that we have watched film on.

“And, to be honest, if he can attempt three more free throws per game, that would be a game-changer for him and for our team.”

Ball doesn’t disagree that it could benefit in a variety of ways.

“Yeah, it helps a lot,” he said. “I feel like any time you go to the free throw line, you are just shooting the ball. So, it helps on every shot.”