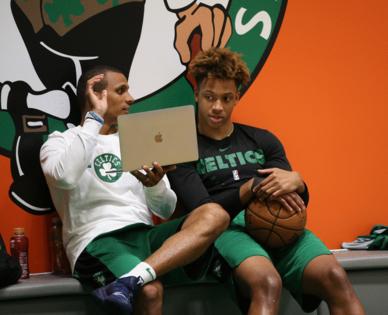 BOSTON — As the Celtics try to find their way through a tumultuous period, they’ll be turning to an inexperienced voice to lead them.

Brad Stevens confirmed Friday that Joe Mazzulla will take over as the Celtics’ interim head coach in the wake of Ime Udoka’s season-long suspension. The 34-year-old Mazzulla — who Stevens hired as an assistant coach in 2019 — does not have extensive experience but the Celtics are very confident that he’s the right man for a difficult job.

“It’s not easy timing for him or the rest of the staff, but he’s an exceptionally sharp and talented person,” Stevens said. “I believe strongly in him and his ability to lead people, his ability to galvanize a room and get behind him. And his ability to organize and understand all that comes with running a team during the season.”

Stevens noted that Mazzulla will have great help from assistants Damon Stoudemire, Ben Sullivan and the rest of the staff.

“They’re a really good group and they’re gonna need to pull together and they’re gonna need to really support each other,” Stevens said. “But I believe in Joe’s leadership and, again, with all of them bringing their strengths to the table, I think that this will be an unbelievable challenge, but it’s also like — I’m really confident in the team and the coaching staff that’s gonna take the court on Tuesday. It’s not what we expected to have happened, but I’m very confident.”

Mazzulla, however, has a checkered past, which is fair to bring up in light of Udoka’s transgressions. Mazzulla, while playing college basketball at West Virginia, was charged with underage drinking and fighting police in 2008. A year later, he was arrested on charges of domestic battery for allegedly grabbing a woman by the neck at a bar. He has not been involved in any incidents since.

Stevens said he thoroughly vetted those incidents before hiring him and has full confidence in his character.

“He’s been very open with me about how those moments impacted him in every which way and you can see it in the way he carries himself,” Stevens said. “I believe strongly that that probably shaped him into who he is today in a really, really good way. But he’ll be the first to tell you, he’s 110 percent accountable for that, and I’ll be the first to tell you that I believe in him.”

Stevens, who coached the Celtics from 2013 until becoming the president of basketball operations last summer, said he’s not interested in being the interim coach. Wyc Grousbeck said there was a brief conversation about it, but it was never under serious consideration.

“There’s a lot of factors in play of why I wouldn’t necessarily even want to do that, but I do think that, and I’ve told Joe this, I’m going to be there for him without stepping on his toes as much as he needs,” Stevens said. “But he doesn’t need much. I believe in that strongly. And hopefully I can help him with any questions he has as he goes through it, but sometimes you just need someone who has been there next to you, to be able to go in and let your shoulders down and talk about what you’re going through, and hopefully I can be that for him.”