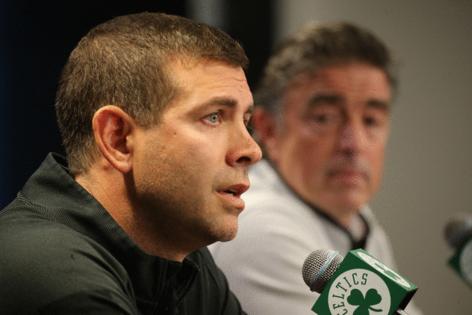 BOSTON — Brad Stevens’ voice shook, and he looked to be holding back tears.

In the wake of the Celtics’ decision to suspend coach Ime Udoka for the entirety of this season after he reportedly had an improper relationship with a female member of the organization, Stevens had a point to make.

After news first broke late Wednesday night and early Thursday morning of the reasoning behind Udoka’s potential suspension, speculation was rampant on social media in trying to identify who the female party involved is, with pictures posted of several women who work for the Celtics. On Friday, as the Celtics addressed Udoka’s suspension, Stevens made an emotional plea against the unfair speculation — unprompted — during his opening statement.

“We have a lot of talented women in our organization and I thought (Thursday) was really hard on them,” Stevens said. “I think that nobody can control Twitter speculation, rampant (expletive). But I do think we as an organization have a responsibility to make sure we’re there to support them now, because a lot of people were dragged unfairly into that.”

Celtics owner Wyc Grousbeck acknowledged the news leaks that led to the social media speculation as part of the business, but admitted some regret in how it played out.

“Any insinuation about the leaks, we don’t know where they come from,” Grousbeck said. “They’re part of the NBA as we all know, in this room, but it’s really unfortunate and it’s unfortunate also that female staff members of the Celtics have been dragged into the public eye unwillingly and inappropriately and we take a strong stand against that and just regret it for them. It’s really, really unfortunate and not necessary.”

Stevens said there was messaging sent out and meetings available for those inside the organization who may have been impacted by the speculation to make sure everyone is supported. It’s clear the Celtics are making that an emphasis now and moving forward.

“I think we still need to make sure that we’re there for a while beyond that,” Stevens said. “I just think that was really unfair, in my opinion. And I don’t know how we control Twitter. And obviously, there’s only so much that we can say. But our job is to support and our job is to be there as everybody goes through that hard time. And everybody digests this stuff differently, obviously. But yesterday was unfair to them.”