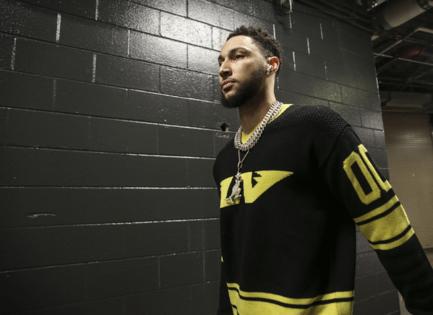 The problem with Ben Simmons has never been that his feelings are unjustified. Rather, the problem is that his feelings have never justified his behavior. This is a subtle but crucial distinction. It is also a classic one, having long served as a line of demarcation between two groups of people: those who accept the fact that that the world does not revolve around themselves, and those who cannot understand why it would operate in any other way.

In that sense, Simmons’ recent appearance on former teammate JJ Redick’s podcast offered listeners an unprecedented level of insight into the circumstances that led to his long and messy departure from the Sixers. The conversation did not yield much in the way of new concrete detail. The major plot points remain the major plot points. The narrative arc remains the same. Simmons felt like his head coach and his longtime co-star had, in Redick’s words, “thrown him under the bus” after the Sixers’ loss to the Hawks in Game 7 of the 2021 Eastern Conference semifinals. The sense of betrayal was magnified by the fact that both Doc Rivers and Joel Embiid were aware of some stressors that Simmons had been dealing with in his personal life and that had taken a toll on his mental health.

By the time anybody realized Simmons felt this way, the damage had been done. When word leaked that his teammates had attempted to organize a cross country flight to visit Simmons in L.A. and convince him to report to training camp, it had the opposite of the intended effect.

“I was in L.A. for months,” Simmons said. “No one came. No one was there. You could have came. Now you want to make it public that you were flying out? That’s [expletive]. No one was getting on that plane. Come on, man. That’s the [expletive] truth. There were guys in L.A. that didn’t say anything to me. That’s irrelevant to me. There was a lot of things that were just getting put out that shouldn’t have been put out, and those people know who they are.”

All of which jibes with the circumstances as we understood it at the time. Simmons’ conversation with Redick isn’t an untold story filled with behind-the-scenes revelations. Rather, it is an hour-long character study that leaves us with a fairly comprehensive understanding of why the events in question led to the outcome it did.

For the most part, Simmons comes across as a sympathetic figure. Likeable, even. Redick’s long experience with life in the spotlight and mature perspective on life gives him a unique degree of empathy for Simmons, and he approaches the conversation in a way that makes that empathy accessible to a general public that can sometimes struggle to see the common humanity that exists beneath the layer of overwhelming material benefit that comes with superstardom.

It can be easy to roll your eyes at the non-confrontational nature of the interview. But to do so is to miss the whole point of the thing. Sure, Redick and his co-host are a friendly audience, but it is not a contrived friendliness. It is a conversation between two colleagues who respect each other and share a mutual understanding that heroes and villains are mostly narrative constructions. The result feels mostly honest: Redick gives Simmons the opportunity to share his feelings about everything from the criticism about his shooting to the infamous non-dunk against the Hawks to the fallout from that series and his eventual holdout and trade.

Simmons articulates his feelings with a perspective that is more mature than you’ll get from a lot of 26-year-old professional athletes. He speaks respectfully of the city of Philadelphia, insightfully of the challenges of being a player with his unique skill set, openly of the disrespect he felt after the post-Game 7 comments from Rivers and Embiid.

Yet empathy does not require commiseration. The issue with Simmons’ departure was never the validity of his feelings. It was the way he chose to deal with them. And therein lies the ultimate revelation of his conversation with Redick.

At one point, Simmons observes that the trials and tribulations of the last year have left him a more mature human being. Yet the ultimate sign of maturity is the ability to recognize and claim personal responsibility for one’s situation. Rarely in the conversation does Simmons even hint at the possibility that he could have handled things differently. And really, at the end of the day, the lack of that quality is the No. 1 reason Simmons is now a Net instead of a Sixer.

A person who felt the way Simmons felt in the aftermath of Game 7 could have dealt with those feelings in one of two ways. He could have done what mature adults do in the face of criticism, which is to take time to evaluate the things they can do better, address the things they disagree on, work to find common understanding, and honor one’s contractual obligations. Instead, he chose Option B: run away.

There is more than a little selfishness baked into the assumption that the world should operate in deference to your feelings. The difficult thing about life is that everybody has feelings. It’s reasonable to expect others to care for and consider your feelings. It is unreasonable to expect that they make them a priority. At one point during the podcast, Simmons was asked if he would do anything differently.

DETROIT — The Pistons are adding another veteran to their core of young pieces ahead of the start of training camp.

Detroit has agreed to trade big man Kelly Olynyk and guard Saben Lee to the Utah Jazz in exchange for ...Read More

The NBA All-Star forward who underwent surgery in July 2021 to repair an injured anterior ...Read More

BOSTON — Celtics coach Ime Udoka is facing the possibility of serious discipline — including a potentially “significant suspension” — because of a violation of team rules, according to a report by ESPN’s Adrian...Read More

PHILADELPHIA — Ben Simmons said during an interview on former teammate JJ Redick’s podcast that he did not feel supported by the Sixers while dealing with mental health struggles in the aftermath of their 2021 playoff ...Read More

MINNEAPOLIS — Jenna Wegner is a lifelong Timberwolves fan who, in the past few trying and tumultuous years, realized "once and for all" she was a woman. She began taking steps to live as her true self and began the ...Read More