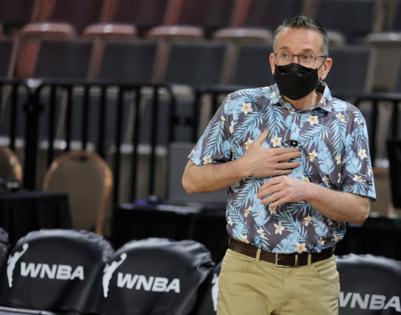 UNCASVILLE, Conn. — The third-seeded Connecticut Sun coasted to a 93-68 win over the sixth-seeded Dallas Wings in Game 1 of a first-round WNBA playoff series on Thursday night at Mohegan Sun Arena.

Game 2 of the best-of-three series is noon Sunday at Mohegan Sun Arena. If the Sun win they will move on to the semifinals and face either the Chicago Sky or New York Liberty.

The Wings were without leading scorer Arike Ogunbowale, who missed the end of the regular season and is out for the first round of the playoffs. Satou Sabally (ankle) and Isabelle Harrison (shoulder) were listed as questionable entering the contest, but would both end up playing.

Sabally, who hadn’t played since July 12, had 10 points. Allisha Gray led the Wings with 17 points.

The Sun were in control for most of the night and led the Wings 47-37 at halftime. Dallas closed the gap to five points in the third quarter before Connecticut put things away.

With a little over four minutes left in the third quarter Williams found a wide-open Natisha Hiedeman on the wing for a 3-pointer. The basket capped a 13-0 run for Connecticut to extend its advantage. The Sun led 68-50 at the end of the period.

Dallas wouldn’t get any closer than 15 points from there as Connecticut ran away with the playoff victory.

NEW YORK — It’s going to take some time before it looks right.

The Nets are sitting on an offense with new philosophies, a defense with new schemes and a roster with new key players entering the rotation. With so many...Read More

CHICAGO — Dalen Terry provided a spark of optimism for the Chicago Bulls in their first game of the preseason, but there’s still plenty to fix as they prepare to start the season without point guard Lonzo Ball.

LEXINGTON, Ky. — The announcement that Ugonna Onyenso — a highly touted center from Nigeria — would be joining the University of Kentucky basketball team for the 2022-23 season came on Aug. 1, just a few days before ...Read More

NEW YORK — So this is what a real point guard looks like.

Jalen Brunson was impressive in his Knicks debut Tuesday, flashing the playmaking and organizing skills that have long eluded this franchise.

Even with Erik Spoelstra voted the top coach in the NBA in the annual survey of league general managers, respect for the Miami Heat continues to wane despite last season’s top seed in the Eastern Conference.