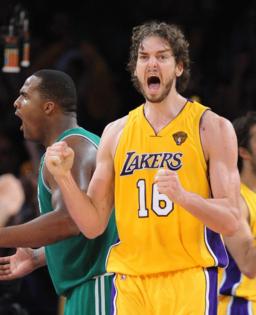 LOS ANGELES — All 10 Lakers whose jersey numbers are retired have been inducted into the Naismith Memorial Basketball Hall of Fame. Pau Gasol stands an excellent chance of being included in a strong 2023 Hall of Fame class.

And whether he's inducted in his first year of eligibility or later on, his No. 16 will already have been retired by the Lakers.

Gasol's No. 16 will be raised to the rafters at Crypto.com Arena during a ceremony March 7, 2023, the Lakers announced Wednesday, appropriately enough during a game against the Memphis Grizzlies.

Gasol played the first 6 1/2 seasons of his career for the Grizzlies but jumped onto the fast track to Hall of Fame consideration after being traded to the Lakers midway through the 2007-2008 season. He developed immediate chemistry with Kobe Bryant and his other teammates, helping lead the Lakers to NBA championships in 2009 and 2010. The Lakers also reached the Finals in 2008.

The acquisition of Gasol and a second-round draft pick in exchange for Kwame Brown, Javaris Crittenton, Aaron McKie, the draft rights to Marc Gasol and first-round picks in 2008 and 2010 on Feb. 1, 2008, wasn't initially viewed as a lopsided deal.

But in hindsight it was a franchise-altering move that gave Bryant a formidable partner and the Lakers a well-rounded, consistent front-court presence for 6 1/2 seasons. Gasol was a three-time All-Star with the Lakers and made six All-Star teams altogether, one with Memphis and two with the Chicago Bulls in 2015 and 2016.

Gasol averaged 18.3 points, 9.9 rebounds and 3.4 assists in 1,226 games over 18 seasons before retiring in 2019. Born in Barcelona, Spain, he was picked third overall in the 2001 NBA draft by the Atlanta Hawks, who immediately traded him to Memphis for Shareef Abdur-Rahim.

During his time with the Lakers, Gasol averaged 17.7 points, 9.9 rebounds, 3.5 assists and 1.4 blocks. In addition to his All-Star appearances, he was a four-time All-NBA player and the 2002 NBA rookie of the year, the first non-American to win that honor.

Gasol, who played for San Antonio and Milwaukee in addition to the Lakers, Grizzlies and Bulls, will have competition to make the 2023 Hall of Fame class. Also eligible for the first time will be Dirk Nowitzki, Dwyane Wade and Tony Parker.

Gasol's No. 16 will be the 11th number retired by the Lakers because Bryant's Nos. 8 and 24 are both retired. Here are the others: