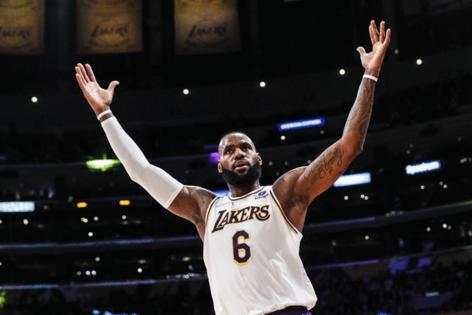 LOS ANGELES — LeBron James has agreed to an extension with the Lakers, a two-year contract with a player option, according to reports.

The deal keeps him from free agency until at least 2024, when he could exercise his option.

The contract is worth the max that could be offered — $97.1 million. It also includes a 15% trade kicker. The deal could grow to more than $110 million with a rise in the salary cap.

James, 37, was set to become an unrestricted free agent following this season — his fifth since signing with the organization in 2018.

He won a NBA title in 2020 but the Lakers haven’t moved past the first round of the playoffs in any of his other seasons with the team.

In 223 games with the Lakers, he’s averaged 27 points, 8.0 rebounds and 8.2 assists. James’ ability to become a free agent, should he exercise his player option in 2024, aligns with his stated desires to play with his son, Bronny James, should he be in the NBA. Bronny James is heading into his senior season with Chatsworth Sierra Canyon High and is widely considered a top-50 prospect in his recruiting class.