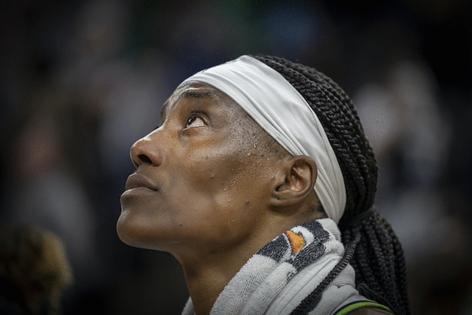 MIAMI — One of America’s greatest, kindest, and most intriguing athletes retired on Sunday after a stellar career, and chances are, unless you follow the WNBA, you probably don’t realize just how special Sylvia Fowles is.

That is truly a pity, and a reminder that despite all the advances in women’s sports, many female athletes — especially ones who are a bit shy and don’t promote themselves on social media — still go underappreciated.

If a 6-6 male Miami native was an eight-time NBA All-Star, four-time NBA Defensive Player of the Year, four-time Olympic gold medalist, had won two NBA titles, league MVP, Finals MVP twice, and was the NBA’s all-time leader in rebounds and shooting percentage, Fowles would be a household name in South Florida.

She would likely have her pick of endorsement offers.

Instead, because the letter “W” precedes “NBA” on all those staggering accolades, she leaves basketball as a legend to those who followed her, coached her and played with and against her, but as a relative unknown to many people who consider themselves diehard sports fans.

If you’re feeling guilty now, don’t. It’s OK. You are forgiven if you don’t know much about Fowles. “Sweet Syl” or “Mama Syl,” as she is lovingly known by her teammates, was never one to seek attention. She is old school and low key, not big on social media. She has just eight total Instagram posts this year and her Twitter feed, with 17,000 followers, consists almost entirely of retweets from the Minnesota Lynx and her teammates.

Although she towered over everyone on the court from the time she dunked as a freshman at Miami Edison High and led Gulliver Prep to a perfect season state title, Fowles always tried to blend in. She is known for her selfless attitude and humility.

Last Friday, the day of her final home game at the Target Center, a day that she was showered with love and gifts from her team, she arrived at the arena loaded with gifts for her teammates, coaches and staff. When they entered the locker room, they found on their chairs hand-knitted beanies that Fowles spent months making, customized Crocs to match everyone’s personality, Gucci bags and Nike sneakers.

When teammate Napheesa Collier had her baby girl, Fowles knitted her a giant basket and filled it with hand-knitted beanies, dresses and a blanket. Fowles loves to knit. She knits hats, sweaters, scarves. She has been knitting since she was a kid growing up in the Victory Home Housing projects in Miami. She learned to do it on the back porch, from her great-grandmother, who used knitting to calm Fowles down when she was a restless little girl.

To this day, Fowles calls knitting her “happy place” and says it reduces her stress. Her home is filled with giant balls of colorful yarn and knitting looms. Her friends and teammates have urged her to sell her beautiful knitted items online.