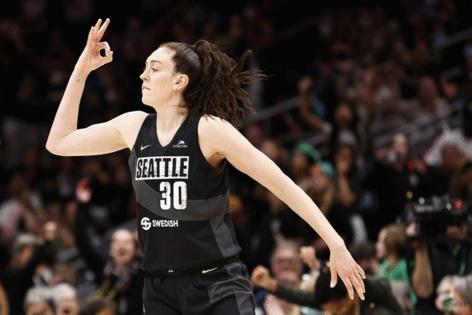 SEATTLE — Breanna Stewart won the Associated Press WNBA Player of the Year award, which perhaps is a bit of foreshadowing for what’s ahead for the Storm star who is vying for several league postseason honors.

Stewart, who led the WNBA in scoring for the first time in her career averaging 21.8 points per game, received six votes for AP Player of the Year by the 10-member media panel, narrowly edging Las Vegas Aces standout A’ja Wilson, who collected four votes.

“It’s an honor to be recognized as the best in the league,” Stewart told the AP. “Since I started in the WNBA in 2016, (I’ve been) just trying to get better. Elevate myself and the team, the league as a whole. A big honor, but we’re motivated by more, and that’s trying to win a championship.”

Stewart, who averaged 7.6 rebounds, 2.9 assists, 1.6 steals and 0.9 blocks, guided the No. 4 seed Storm to a 22-14 record and a first-round playoff matchup against against No. 5 seed Washington that begins Thursday at Climate Pledge Arena.

Wilson, who claimed the AP Defensive Player of the Year award, led Las Vegas to a league-best tying 26-10 record, the No. 1 seed and homecourt advantage throughout the playoffs.

Stewart and Wilson were voted to the AP All-WNBA first team along with Kelsey Plum, Candace Parker and Sabrina Ionescu.