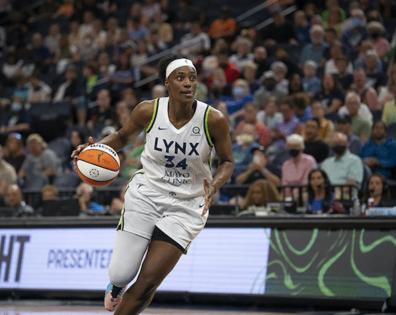 Lately it's been especially intense. Fowles, the greatest classic, back-to-the-basket center the WNBA has seen, has always approached her job with a singular focus. All that mattered was her job, her team, her teammates, the next game.

But lately, the periphery has crowded in. As the 15th and final season of her career wound down, as she has gone from one arena to another, receiving gifts, hugs, thanks?

"These past two weeks I've been the most emotional,'' the Lynx center said. "I always say that I tend to go into this thing blindfolded. I just do my job. I don't pay attention to the outside world and how they see me. But to sit back and go city to city, to have gotten all the love and appreciation that I've gotten? It makes me feel I've done something right for the last 15 years. So you think about those things. I do a lot of my reflection at night, and that's when I cry.''

Not out of sadness. Fowles has loved her career, but she won't struggle walking away from it. At the start of the season she talked about writing the end to her own story, and she has done that. Fowles studied mortuary science during her career and she has two job offers waiting back home in Florida. She wants to travel. She wants to become a mother.

No. It's joy. Ask Fowles what she remembers most about her career and you won't get a game, a play, maybe even a title or her 2017 MVP award. She'll talk about her great teammates, the relationships she forged.

Which is why Friday will be so ... Intense.