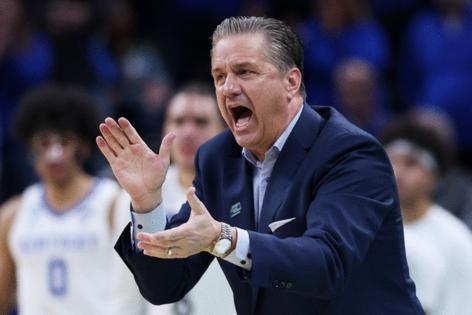 Backers of the Blue have every reason to be excited about the improvement of Daimion Collins; the outside shooting of Antonio Reeves; the confident comportment of Jacob Toppin; and the evident promise of freshmen Chris Livingston, Adou Thiero and Cason Wallace.

So enjoy the kind of decimation the Wildcats applied to the Dominican Republic National Select Team, 108-56, in the exhibition opener Wednesday night. It seems likely the Cats will pin similar beatings on their three remaining exhibition foes (which started with Tec de Monterrey, a Mexican college team, Thursday) for you to relish, too.

As a caveat, it would likely be wise to hold on to one note of caution. The last time Kentucky took an exhibition tour of the Bahamas, before the 2018-19 season, UK won its four games by margins of 24, 23, 36 and 33 points. The Cats then opened their regular season with a 118-84 loss to Duke.

With that disclaimer, I do think a quality Kentucky has on display this week in the Baha Mar resort convention center bodes well for UK’s fortunes in the next March Madness.

Defensive length is back for the Cats.

In Wednesday’s mauling of the overmatched Dominican Selects, Kentucky pilfered the basketball 13 times and swatted 10 shots. After a year’s hiatus, the adjectives that have been synonymous with John Calipari-era UK basketball rosters, long and athletic, again apply to the 2022-23 Cats.

“We feel like we’ve got a pretty decent team,” Kentucky assistant Orlando Antigua said after serving as UK’s acting head coach in the win over the Dominican Republic Select Team. “We’ve got size and athleticism.”

It was exactly what Kentucky lacked a season ago.

"The outpouring of love and ...Read More

ATLANTA — I’m confident that Trae Young and Dejonte Murray will make it work sharing the ball as Hawks backcourt partners. The Hawks already know how to score. Young and Murray will work out the details on the best way...Read More

PHILADELPHIA — Monday will be about talking for the Sixers, who will hold their annual media day to unofficially lift the curtain on the 2022-23 season before heading to Charleston for training camp.

That marks one of ...Read More

BOSTON — As the Celtics try to find their way through a tumultuous period, they’ll be turning to an inexperienced voice to lead them.

Brad Stevens confirmed Friday that Joe Mazzulla will take over as the Celtics’ ...Read More

BOSTON — Brad Stevens’ voice shook, and he looked to be holding back tears.

In the wake of the Celtics’ decision to suspend coach Ime Udoka for the entirety of this season after he reportedly had an improper ...Read More