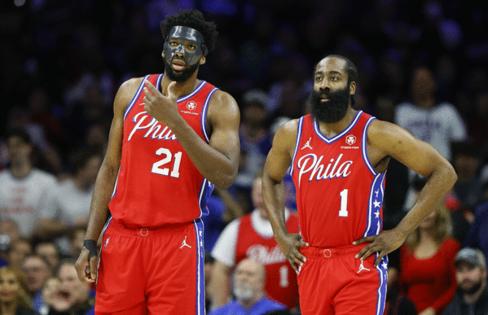 For instance, if you knew that one of your chief conference rivals was attempting to trade for a player who would make them an overwhelming NBA Finals favorite, and if you had some means at your disposal to make that process more painful for said rival, wouldn’t it be difficult to resist the temptation to exercise that ability? Especially if all you needed to do was let it be known that you were considering a bid for the same player?

I’m not saying that this is what is going on with the latest report mentioning the Sixers and Celtics as potential suitors for disgruntled Nets superstar Kevin Durant. I’m just saying that it’s enough of a possibility that I’ll need to see a lot more smoke before I set up camp in the ol’ fire tower.

The report in question comes from SNY.tv insider Ian Begley, who says there are some “high-ranking members” within the Sixers’ front office who “have felt strongly about engaging with Brooklyn on a Durant trade.” Obviously, that’s worded vaguely enough that you can pretty much interpret it any way you want it. At the moment, there is no indication that the Sixers and Nets have engaged in any substantive trade discussions for Durant. But the report does have one bit of information that is concrete enough to move the ball forward: Durant is open to playing in Philadelphia.

That’s significant, given that playing in Philadelphia would require Durant to reunite with James Harden, who forced his way off the Nets this season. Considering the way the duo’s tenure in Brooklyn ended, it was fair to wonder whether Harden’s presence would make the Sixers a nonstarter.

If Durant does, in fact, see the Sixers as a viable landing spot, the Sixers have little choice but to think about making an offer. After all, it’s Durant we’re talking about. Pairing him with Joel Embiid and Harden would make the Sixers an instant NBA Finals favorite for at least the next couple of seasons. Opportunities like that do not come around very often.

If Durant is serious about Philadelphia, then the Sixers have to seriously consider him. The two big questions:

Regarding No. 2, there’s a simple argument that Durant would make sense, regardless of the cost. Basically, it’s now or potentially never. Embiid will be 28 years old this season. Given the aging curve of big men, Embiid could easily enter his decline phase by the end of the current three-year window. Any roster considerations beyond that window have to account for the possibility that the Sixers are no longer building around Embiid.

Sure, Durant could again decide that the grass is greener somewhere else and leave the Sixers in the same position as the Nets. But, hey, Embiid could do the same thing if they don’t give him a viable chance to win a title this year. YOLO.

I don’t totally buy that rationale, but let’s assume that it’s true for the sake of the argument.

I’ve been skeptical that the Sixers have the sort of assets that would win the bidding for Durant. They don’t have a tradeable first-round pick until 2029, and Tyrese Maxey is their only asset with significant near-term value. Matisse Thybulle is a value-add sort of player, the kind of asset that might do little more than cancel out the cost the Nets would assume with Tobias Harris’ contract. If the Celtics are a legit landing spot — it’s hard to imagine that Maxey and a 2029 first-rounder would form the basis of a package that is more attractive than a package built around Jaylen Brown.

While the Sixers do not have a first-rounder they can trade outright until 2029, they can offer the Nets the right to swap picks in 2024, 2026, and 2028. That’s not nothing, especially when you look at the potential trajectory of an Embiid-Durant-Harden trio. By the 2025-26 season, Embiid will be 31, Durant 37, and Harden 36. There’s a more than decent chance that the Sixers are a really bad team in 2025-26, regardless of what that trio accomplishes before then. The right to swap picks with the Sixers in 2026 might be a lot more attractive than a potential late first-round pick from a Celtics team that will still have Jayson Tatum in his prime.

A package of Maxey, Harris, Thybulle, and swap rights on the 2026 and 2028 picks might be more attractive than it sounds.

Which returns us to the second big question: Given the Sixers’ limited future assets, does the awesome potential of two or three years of Durant plus Embiid plus Harden cancel out the significant risk that the thing blows up in their face and leaves them with nowhere to pivot for the next half decade? What if they are a lottery team three years from now with no potential of a lottery pick until 2029 or 2030 and no other young players to build around?

Lots to consider. I remain skeptical that the Sixers can — or should — pull it off. But it’s a situation worth monitoring.