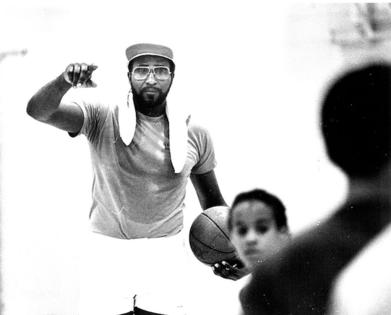 "I was named as the 'outstanding shooter' in Clyde's camp,'' Johnson said Tuesday. "My jumper must've been falling because there were some outstanding young players that week.''

Turner came from Champaign, Ill., and was a star at nearby Robert Morris Junior College. He was recruited to the Gophers by new coach Bill Musselman for the 1971-72 season, along with two other JUCO standouts — Ron Behagen and Bobby Nix.

The brawl with Ohio State on Jan. 25, 1972, put a scarlet letter on that team, even as it won the Gophers' first Big Ten title in 25 years. It also produced a few remarkable Minnesota transplants.

Turner would be at the top of the list, with his decades of work with city youth — three weeks in the summer with the camp, and well beyond that as a social worker, with Big Brothers and Big Sisters, with the PACE Foundation for children, etc.

Charles Hallman, teacher, coach, columnist for the Minneapolis Spokesman-Recorder, 2022 inductee into the U.S. Basketball Writers Association Hall of Fame, was an organizer with those camps, and Turner's close friend for decades.

He was among a fair-sized collection of people who visited Turner on Monday to say goodbye. Clyde died early Tuesday morning, from cancer and other issues, at age 70.

"Clyde was a huge believer in second chances,'' Hallman said. "A kid would mess up and he would say, 'I think he can be a good kid. We're going to give him another chance.'"

Hallman laughed and said: "But a third chance? Nope. A kid had to take advantage of the second chance."

Turner wasn't a kid, he was a young man, but he seized a second chance to become an under-the-radar hero in the same adopted hometown where his team, the 1971-72 Gophers, had been deemed villainous.