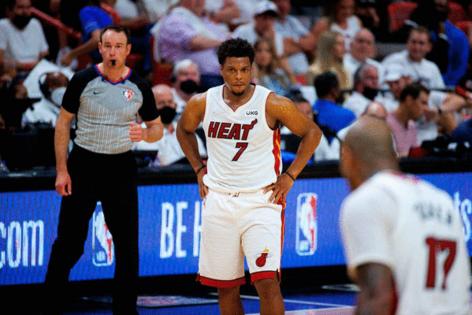 As the highest-paid player on the Heat’s roster not named Bam Adebayo or Jimmy Butler, Lowry’s name has been brought up in some of the trade speculation for Brooklyn Nets star Kevin Durant in part because he’s on a salary that can help facilitate a deal. Lowry, 36, also has faced some outside criticism following a postseason that was derailed by a hamstring injury.

“I hear it. I don’t respond to it,” Lowry said cryptically when discussing what’s motivating him this summer during a recent podcast appearance on The VC Show with Vince Carter. “I have my social media, but I’m not even on my social media right now, to be honest with you. I only did this interview because you’re my man. I’m dark right now. I’m out of the way. I’m cool. I don’t need to speak.”

Lowry’s insight on Carter’s podcast marked some of his first public comments since the season ended. Lowry also stood in front of reporters last week when he returned to Toronto for a golf tournament for the foundation of Raptors coach Nick Nurse.

At the golf event, Lowry spoke about the impact that an off-the-court issue had on his first season with the Heat. The family matter has remained private, but it kept Lowry away from the Heat for nine consecutive games from Jan. 17 to Feb. 1 and another four games from Feb. 28 to March 5.

“I’m still dealing with it,” Lowry said to a group of reporters in Toronto of the family issue, with the Heat scheduled to open training camp on Sept. 27. “It’s a situation when it’s better, I’ll talk about it more, but it’s definitely something that kind of derailed my whole season and kept me derailed for a long time. Still to this day, it’s still something I deal with every single day, I actually got a phone call just now about it.

“It’s life, life happens and you just have to continue to get better and focus on the things you can control and try to help as best you can.”

Despite all of that, Lowry still made the Heat better last season.

After spending the previous nine seasons with the Raptors, Lowry averaged 13.4 points while shooting 44 percent from the field and 37.7 percent on threes, 4.5 rebounds, 7.5 assists and 1.1 steals last regular season. The Heat was also 2.5 points per 100 possessions better when Lowry was on the court.

“Spo is one of a kind, people, and he’s really good,” Lowry said to Carter. “We had a meeting in Vegas when I first agreed to the deal I signed [last summer]. I said, ‘Listen, coach. I understand the Miami Heat culture, I understand the Miami Heat way. I do.’ But I said, ‘But I’m a grown ass man and I do some grown man things.’ Spo was so receptive and so appreciative of it because I never did anything that harmed what they did, harmed the Heat culture. But at some point, we change the way we play and we change the way we act.”