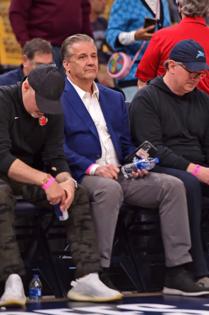 The Nov. 20 meeting in the Spokane Arena will be only the second men’s basketball matchup ever between the Wildcats and the Zags. It will also likely be the most-hyped non-conference game in college hoops in the coming season.

In the big picture, will it end up being considered the most-anticipated UK game of the Calipari coaching era (since 2009-10)? Bear with me, I will give you a top five of such games.

As a matchup, Cats vs. Zags will supply ample fuel for what will be a run-away hype train:

— A likely meeting of top-five teams. CBSSports.com college hoops writer Gary Parrish has Gonzaga No. 1 and Kentucky No. 4 in his Top 25 and 1 rankings. ESPN.com’s Jeff Borzello has the Zags No. 2 and the Cats No. 4 in the Way-Too-Early Top 25. SI.com’s Kevin Sweeney also has Gonzaga at No. 2 and Kentucky at No. 4.

Meanwhile, Gonzaga, even without winning an NCAA championship yet, has arguably been the top program in the country over the past half-decade. Few has coached the Zags to at least the round of 16 in every NCAA tourney since 2015 and to the NCAA Finals in 2017 and 2021. Only Villanova (20) has more NCAA Tournament victories than Gonzaga (19) since 2016.

— Elite big men. Kentucky-Gonzaga will feature a low-post showdown of fourth-year college stars that is straight out of college basketball’s old school.

Because not even good things in 2022 can come without controversy, the announcement of Kentucky playing Gonzaga ginned up contention when Calipari took to Twitter on Wednesday to state that the Cats and Zags would play in Spokane Arena, a municipal facility, rather than in Gonzaga’s on-campus McCarthey Athletic Center.