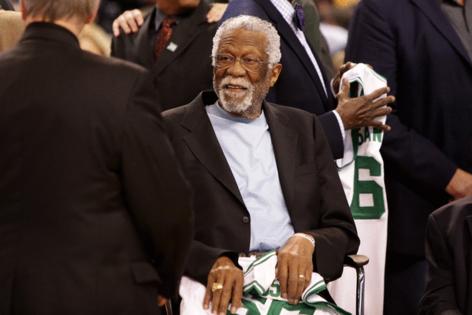 PHILADELPHIA — It’s a testament to Bill Russell that one of the most underrated aspects of his life is that he revolutionized college basketball. His work and activism within the civil rights movement, his remarkable career with the Boston Celtics, his well-earned status as the greatest winner in North American team sports: These qualities and achievements were listed and lauded, rightly, in the immediate aftermath of his death last Sunday. They gave his passing a resonance in Philadelphia, too, as did his role as an adversary to two of the city’s basketball legends. One of them was his Hector on the day that he changed a sport forever.

For those who grew up rooting for the Warriors or 76ers, Russell was a particular kind of rival. He possessed an intangible, nameless … something — An unsurpassable will to win? Toughness? Unselfishness? All of these attributes and more? — that Wilt Chamberlain did not have and the Celtics’ opponents could not overcome. Red Auerbach would light a victory cigar and gloat, which made him easy to hate, but there was nothing to do with Russell but acknowledge his greatness, especially his ability to enhance the collective performance of his teammates, and respect him for it.

More than 70 years have passed since Tom Gola emerged as the savior of a sport that needed saving, so it’s difficult now to appreciate his impact. But it was tangible and meaningful. When Gola led La Salle to the 1952 NIT championship at Madison Square Garden — at a time when the NIT was more prestigious than the NCAA Tournament — it marked the moment that college basketball began to cleanse itself of the point-shaving scandals, largely at schools based in New York, that had tarnished the sport.

Gola was the perfect poster boy. He was the son of a cop. His reputation was pristine. He played for a little college in his home city. He was handsome and 6-foot-6 and was unlike any player who had come before him, in that he could play any position on the floor and did.

“He was Magic Johnson,” the late college basketball writer and historian Bob Vetrone Sr. once said, “without the flair.”

National magazines profiled him and put his photograph on their covers. He appeared on "The Ed Sullivan Show." He would finish his collegiate career with 2,461 points and 2,201 rebounds; the latter mark remains the NCAA record. La Salle won the 1954 national championship and reached the title game again the following year, where the 26-4 Explorers would face a team with just one loss: the San Francisco Dons. A team to which no one around the country was paying much attention. A team, in the era when college basketball was just beginning to integrate, with three Black starters, one of whom was a junior center who had been 6-foot-5 and 158 pounds when he entered USF and had grown four inches and put on more than 50 pounds of muscle over the subsequent two years. A team with Bill Russell.

“The West Coast was not a prominent factor in NCAA basketball,” Gola said in 1989. “People aren’t going to believe me, but Bill Russell was not a big name on the East Coast. … Russell didn’t know me, and I didn’t know him. In fact, I had never seen Bill Russell until we met in the lobby of the hotel.”

That meeting took place on March 19, 1955, the day of the national title game, at the hotel in Kansas City where the La Salle and USF teams were both staying. Russell and assistant coach Ross Giudice passed Gola and La Salle head coach Ken Loeffler in the lobby.

“You’ll be seeing a lot of him tonight, fellas,” Loeffler said.

Not quite. Because Gola was La Salle’s de facto point guard, Phil Woolpert, USF’s head coach, wanted to limit the amount of time Russell spent guarding him, for fear that Gola would pull Russell away from the lane and basket. So Woolpert assigned guard K.C. Jones to cover Gola, which in turn allowed Russell to come off his man and lend Jones help. The strategy surprised Loeffler and the Explorers and worked wonderfully. Billy Packer, who spent more than 30 years as a college basketball analyst, was 15 years old then and a Gola devotee. He listened to the game on the radio and couldn’t believe what he was hearing.

“The guy doing the game kept talking about this guy Russell who kept blocking Tom Gola’s shots,” Packer told John Feinstein for Feinstein’s book "Last Dance: Behind the Scenes at the Final Four." “I’m thinking, ‘That’s impossible. No one can do that to Gola. Who is this guy Russell?’ ”

He was the guy who finished that game with 23 points and 25 rebounds, leading the Dons to an easy 77-63 victory. Who, with Jones, forced Gola into missing nine of his 15 shots from the field and limited him to 16 points. Who led San Francisco to a 55-game winning streak, an undefeated season, and another national title in 1955-56. Who lifted college basketball above the rim. Who compelled the NCAA to change its rules, widening the lane from six feet to 12 feet and outlawing offensive goaltending.