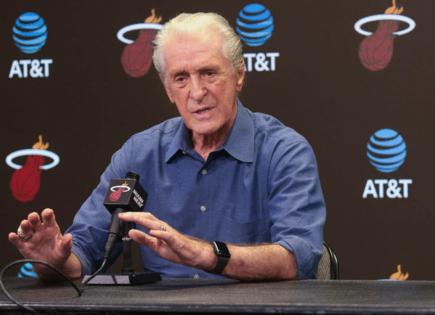 MIAMI — Pat Riley thought the Miami Heat had “an absolutely great year, a year we could really be proud of.” Yet the club’s longtime president did not listen to or read anything in the media as the season ended, saying, “I took a break from what I felt would probably be an assault. That’s just the way it is.”

A couple of days after the NBA season ended in heartache for Miami, just short, there was another victory to cheer.

“I got my granddaughter to clap at nine months to ‘Let’s go Heat!’ ” said Riley. “Got her to do this on FaceTime. That was quite an accomplishment of coaching.”

Sometimes when work hurts you, life lifts you up again.

You are in a pretty good place, as a franchise and as the man leading it, when coming within 16 seconds of a Game 7 in the Eastern Conference finals is a “great year” — but also one ultimately disappointing. When even great is not good enough.

So it is that Grandpa Pat, 77, digs in to work ahead of his 28th season running the Heat, as the offseason shifts into high gear with Thursday’s start of free agency — the time of “Bird Rights” and “taxpayer midlevel exceptions.”

Since 1995 only the Warriors, Lakers and Spurs have won more NBA championships than Miami’s three. While South Florida sports fans wait (and wait) for the Dolphins and Marlins to matter again, the Heat continues reliably, relentlessly competitive under Riley.

The American arrived at Sheremetyevo airport outside Moscow and was arrested after a luggage search found vape cartridges containing cannabis oil that was prescribed by a U.S. doctor to treat chronic pain. There were ...Read More

LAS VEGAS — The Aces will enter Thursday’s showdown with the No. 1 seed Chicago Sky and probably the first round of the playoffs shorthanded.

For instance, if you knew that one of your chief conference rivals was attempting to trade ...Read More

NEW YORK — A new team has joined the Kevin Durant sweepstakes, and it’s the same team that pried away another Nets superstar.