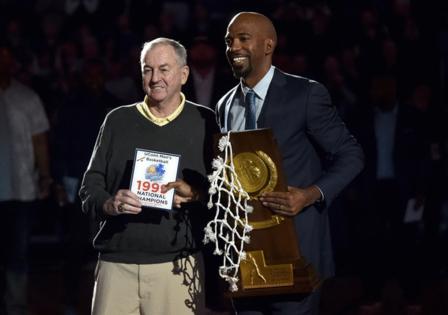 In addition to Calhoun and Hamilton, the Class of 2022 include former players Frank Selvy of Furman, Larry Miller of North Carolina and the late Jimmy Walker of Providence, along with former coaches John Beilein, Jerry Krause and Lon Kruger.

The class will be honored on Nov. 20 in Kansas City, Mo., as part of the National Collegiate Basketball Hall of Fame Weekend. That weekend also features the annual Hall of Fame Classic tournament.

Calhoun and former North Carolina coach Roy Williams will receive formal recognition in the Class of 2022 as the pair were initially part of the Hall of Fame’s founding class in 2006.

Calhoun led the Huskies to three national championships in 1999, 2004 and 2011. He’s part of a prestigious list of just six coaches in NCAA Division I history with three titles or more. In his tenure at UConn, his teams reached 16 NCAA Tournaments, four Final Fours and won 10 Big East regular-season championships along with seven Big East Tournaments.

Along with UConn, he coached at Northeastern and the University of Saint Joseph and finished his career with 920 wins. He retired in 2021 after three seasons of at Saint Joseph.

Hamilton had quite an illustrious career with the Huskies. In his three years with the team (1996-99), he accumulated 2,036 points, ranking second-most in school history.

In the 1998-99 season, Hamilton led UConn to its first national championship and was a consensus first-team All-American, the Big East Player of the Year and the Final Four Most Outstanding Player. In his three seasons, he won Big East player of the year twice and made All-Big East First Team two times.

Hamilton played 14 seasons in the NBA, making three All-Star Games and winning a title with the Detroit Pistons in 2004.