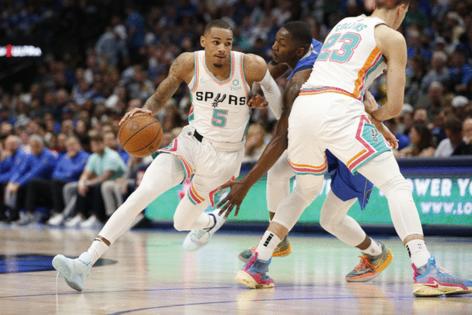 Per ESPN, the Hawks dealt forward Danilo Gallinari and three first-round picks to the Spurs in exchange for All-Star guard Murray. The picks are the Hawks’ 2023 first-round pick via the Hornets as well as their own 2025 and 2027 first-round picks, which both are unprotected. The sides also agreed to swap picks in 2026.

Now, the Hawks will add a strong defender to the fold as they look to redefine their identity on defense. Murray has been touted as a solid defender who makes life tougher for smaller guards. He has a good read on the game and can smother passing lanes, which allowed him to average 2.0 steals per game this past season.

Murray has had steady growth over the past three seasons after missing the 2018-19 season with an ACL tear. Murray has two years remaining on his contract and is set to earn $16.5 million next season and $17.7M in 2023-24.

The Hawks needed a roster shake-up after a disappointing end to last season that saw their early exit following the first round of the playoffs. They also needed to make a move with Gallinari’s contract set to make $21.4 million next season. His deal was set to become guaranteed by the end of day Wednesday.

If the Hawks had outright waived Gallinari, they would have gone under the luxury tax, but instead they aimed to get a return on the Italian sharpshooter.

Now the Hawks will continue to iron out how they’ll pair Murray and All-Star guard Trae Young. Both players often have played as the primary ballhandler throughout their careers, so the Hawks will need to decide how best to utilize their strengths.

Young, of course, is the stronger shooter of the two. He made 38.2% of his 3-pointers last season, while Murray made almost one-third of his shots from that range. Both Young and Murray have the ability to put the ball on the floor and get shots from inside, with the two making roughly 50% or more of their baskets from the floor.

As for their roster, the Hawks still have at least nine players under contract, plus their rookies. The Hawks likely will go over the salary cap and will have the ability to re-sign some of their free agents.

The free-agency moratorium is set to lift Thursday evening.

NEW YORK — The Brooklyn Nets have gone from being the NBA’s signature attraction on Christmas Day to a team known for endless speculation, controversy and dysfunction.

The latest plot twists are courtesy of Kevin ...Read More

MINNEAPOLIS — Leave it to a student of mortuary science to get the ending right.

Sylvia Fowles, soon to transition from basketball great to mortician, played what might have been her last home game for the Lynx on ...Read More