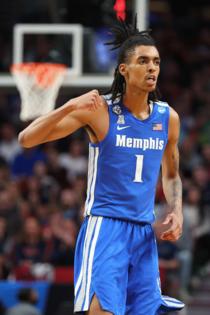 Now, Heath is bringing back the closest thing Ypsilanti, Mich., has to a modern-day folk hero, and one he surely hopes will provide the kick-start toward building a winning program.

Emoni Bates, a Ypsilanti native and former No. 1 high-school prospect in the country, announced Wednesday his commitment to Eastern Michigan in a post on his Instagram page. The announcement was accompanied by a video that included highlights from his college, high school and even youth driveway days, wearing an Eastern Michigan jersey, under the headline, "I'M BACK."

"People probably look at me crazy because I'm considering Eastern," Bates told recruiting website On3.com in a May interview. "But if I went there, I would be like the neighborhood hero. I used to play at Eastern during my high school games when I was at Lincoln, and we used to pack it out every time. That would be crazy for me to be able to bring love to the city."

Bates entered the transfer portal in April after a rocky freshman season at Memphis. He also was considering Arkansas, DePaul, Louisville, Michigan and Seton Hall before deciding to return to his hometown.

There was a report in the Memphis Commercial Appeal that Bates' father, EJ, had recently attended a Memphis camp to gauge head coach Penny Hardaway's interest in Emoni returning for a second season.

Bates played three seasons of prep basketball in Michigan, where he quickly became a star. He led Ypsilanti Lincoln to a Division 1 state championship as a freshman in 2019 and was the 2020 Gatorade national player of the year after averaging 32.4 points, 9 rebounds, 3 assists and 2.2 steals. As a junior at Ypsi Prep Academy, he averaged 24.6 points, 6.6 rebounds and 2.4 assists.

Bates, still just 18, long held the title as the nation's top recruit in the Class of 2022 before he reclassified to the Class of 2021. He was a consensus five-star prospect and initially committed to Michigan State before reopening his recruitment and choosing Memphis.

There, the 6-foot-9 forward averaged 9.7 points, 3.3 rebounds, and 1.3 assists in 18 games, with 13 starts, as a freshman at Memphis. He missed a significant amount of time because of a reported back injury last season, returning for the NCAA Tournament. There also was reported friction between Bates and teammates.

At Eastern Michigan, several of his new teammates already are his friends, including three other key "gets" for Heath on the recruiting trail. Earlier this offseason, the Eagles landed forward Legend Geeter (River Rouge and Providence), guard Orlando Lovejoy (Detroit and Summit Academy North) and guard Tyson Acuff (Detroit Cass Tech and Duquesne), as well as forward Jalin Billingsley, a transfer forward from Georgetown. Forward Joey "JZ" Zaher is an incoming freshman, from Flint Powers Catholic.

Bates also will have a head coach in Heath who saw several Emoni Bates comps during his four-year stint in the G League before taking the Eastern Michigan job, and could be well-positioned to get the most out of Bates as he continues to eye a long pro career that once seemed like a certainty but not so much anymore.

"Player development," Heath told The News recently, "is something we really target."

At Eastern Michigan, Bates will join a team that's coming off a 10-21 season, its 5-15 record in the Mid-American Conference not enough to qualify for the league tournament. The Eagles lost three of their top four scorers but return their leading scorer in sophomore point guard Noah Farrakhan, as well as forward Colin Golson Jr.

While Eastern Michigan's 2022-23 nonconference schedule isn't finalized, there's a good chance the Eagles will play Michigan State, the team Bates originally committed to, and Michigan, a team Bates considered before deciding to return home to Ypsilanti.