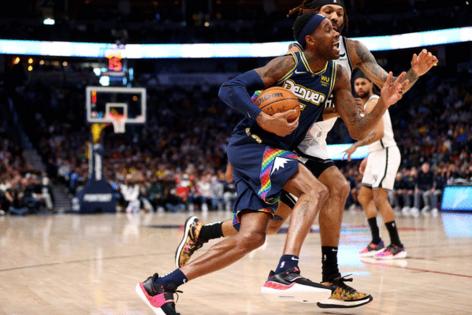 Booth said he knew the team needed to improve defensively, and he vowed to be aggressive in trying to make it happen. He accomplished both Wednesday, sending veterans Will Barton and Monte Morris to Washington in exchange for shooting guard Kentavious Caldwell-Pope and point guard Ish Smith, sources confirmed to The Denver Post.

The Nuggets had been eyeing Caldwell-Pope since the trade deadline and viewed him as a defensive upgrade who had championship experience, sources said. The expectation, sources said, is that Denver won’t waive Smith, who can be a spark plug off the bench.

Caldwell-Pope, who averaged 13.2 points on 39% 3-point shooting last season, has one year remaining on his contract, and the Nuggets have interest in retaining him beyond this season, a source told The Post.

With Booth running the Nuggets, Denver had a self-prescribed mandate to get better and bigger on the defensive end. Caldwell-Pope, 29, is an immediate upgrade in the backcourt over Barton.

Morris was an invaluable piece of the Nuggets roster last season as he started while Jamal Murray recovered from his ACL tear. In playing so well, and establishing career-highs across the board, he not only proved he could handle starting point guard responsibilities but he drove up his appeal across the league.

Prior to last week’s draft, the Nuggets received calls about Morris from more than 20 teams, multiple sources told The Post.

Numerous teams saw what the Nuggets saw in Morris and viewed him as a starting-caliber guard who might not get to start once Murray returned to the starting lineup.

In moving Morris now, Booth capitalized by taking advantage of the steady guard at his highest value. Having started last season, it was unclear whether he’d be slated to start heading into this season. As Murray returned, and Bones Hyland blossomed into a reliable scoring guard, moving Morris became more palatable. The deal represents a significant gamble on Hyland and all that he’ll be able to shoulder on the second unit.

Barton, with one year and $14 million left on his deal, was a different case than Morris. Pairing Morris with Barton in the trade may have been a necessity, as many teams weren’t interested in taking on a 31-year-old with a history of injuries who struggled to defend.

In aggregate, the Nuggets improved at shooting guard by getting younger and better defensively, while eliminating the redundancy of having Morris and Hyland on the roster. The Nuggets’ starting lineup didn’t need anymore shot creators like Barton. It needed a steady two-way presence to stretch the floor and capitalize on Nikola Jokic’s play. In one move, the Nuggets added shooting and perimeter defense.

Few starting fives in the NBA will be able to rival Denver’s with Murray, Caldwell-Pope, Aaron Gordon, Michael Porter Jr. and Jokic.

Defensively, the Nuggets knew they needed to get Gordon some help. Now, instead of asking Gordon to guard dynamic guards, they can leave him to the bigger wings of the West, while allowing Caldwell-Pope to challenge opposing backcourts.

As painful as it was for the Nuggets to give up Morris, they likely improved their most glaring flaw in adding one more defensive stopper to a team that has designs on a championship.