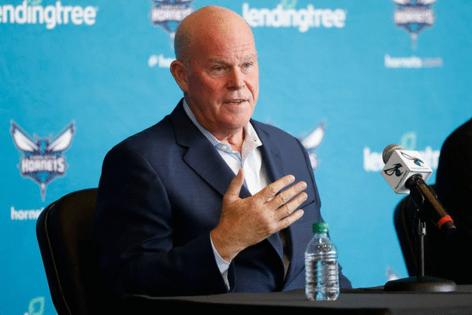 CHARLOTTE, N.C. — It’s one thing to say Steve Clifford didn’t burn any bridges when he got fired as the Charlotte Hornets’ coach in 2018, and that has helped him return to the exact same job four years later.

It’s quite another to realize how far that “no bridges burned” concept went. An example given in Clifford’s introductory — well, re-introductory — press conference Tuesday brought it home.

When the Hornets hired Mitch Kupchak as their new general manager in April 2018, one of the very first things he did was to fire Clifford. Kupchak tried to let him down gently — he knew Clifford from the time the two had worked together for the L.A. Lakers. But still, he fired the coach within a few days of getting to Charlotte.

Only 48 hours after the pink slip, Kupchak and Clifford went out to eat.

“Sounds a little unusual, right?” Kupchak said. “Let somebody go and then two nights later, you’re having dinner together.”

But Clifford is like that. He’s not much for holding grudges, especially against people he considers friends. And he’s also smart enough to know the NBA is a circular business, with a lot of the same characters popping up in different roles around the league.

While at that dinner, Clifford asked Kupchak where he was going to live, since the GM was just moving to Charlotte himself. I’m not sure, Kupchak said.

Well, Clifford said, I’ve got a nice place I don’t have much use for anymore.

Kupchak took a look at Clifford’s uptown apartment, which was very close to the Hornets’ home arena, and said he’d take it. So for the past four years, he’s lived in Clifford’s old space.

Clifford wasn’t exactly his landlord — “not unless he owns the building,” Kupchak joked — but Kupchak assumed Clifford’s lease and moved in.