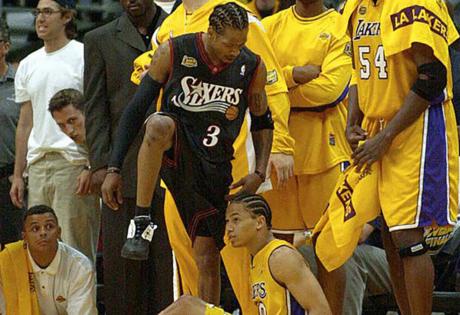 PHILADELPHIA — Pat Croce wasn’t just building a basketball team when he became 76ers president in 1996. He was leading a revolution.

“At the time, that’s what I called it,” Croce said.

The Sixers — owners of five straight losing seasons — were drifting toward irrelevance.

“No one was coming to the games,” said Croce. “We only had 3,000 season-ticket holders. We needed a revolution in attitude, in perspective.”

And the revolution also needed a new look.

So 25 years ago this month, the Sixers ditched red and blue for black and gold as they revolutionized their uniforms with the help of Allen Iverson, who assisted in the design of the jerseys just before he reenergized the franchise.

As teams across all sports — from the Kansas City Royals to the Duke Blue Devils — fused black into their color schemes, so did the Sixers. And the black jerseys that defined one of the franchise’s proudest eras could soon be returning to the court.

They won’t be worn next season to coincide with the 25th anniversary as the Sixers are not one of the teams authorized by the league to wear a throwback — or “classic” — uniform in 2022-23. But it’s safe to assume that the black uniforms are in the conversation to be worn as alternates the next time the Sixers are allowed to do so.

“I would be ecstatic,” said Tom O’Grady, who designed the jerseys 25 years ago when he was the NBA’s creative director. “I think the fans would be happy. I think it would be good. It doesn’t have to be the dominant uniform, but maybe for Saturday games or special games. It wouldn’t feel forced. They had a run, they went to the Finals in that uniform. It’s not foreign to the Philly fans.”

Almost every NBA team received a face-lift in the 1990s as O’Grady and his team redesigned logos and uniforms to keep up with the exploding merchandise market. Late NBA commissioner David Stern told the designers to stay away from the classic looks of the Celtics, Bulls, and Knicks, but everyone else was fair game.