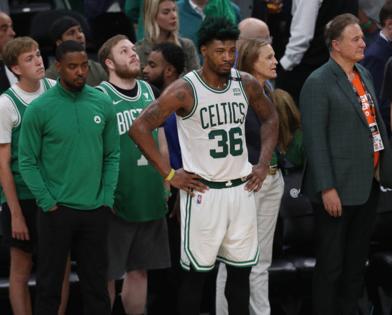 “For me, I wish Rob (Williams) didn’t tear his meniscus. I wish I didn’t mess my ankle up to where I’m struggling to play and had to put an ankle brace on. I wish we didn’t run out of gas,” he said, adding that he won’t need surgery, just rest. “Obviously those series we went through to get to the Finals were so brutal, but I wouldn’t change a thing about it. You hate to find your lessons in defeat, but sometimes you have to see rain before a rainbow. But think things I lay in bed thinking about are our execution. We had so many damn turnovers, man, it was ridiculous. Unfortunately that’s what we’d been doing the last couple of series. We flirted with it and it finally backfired and it bit us in our butts.

“I’m proud of the heart that we showed. I’m proud of the way we fought. Early in the season if you told us we’d be two games away from winning the NBA Finals in 2022, I’d have laughed at you. I’ll take it. Obviously we’ve got a lot to learn from it. We’re not satisfied. But to be able to taste that is a blessing itself, because most people have long careers and never taste that or made it there. So it definitely hurts, but it’s something we have to learn from and try to capitalize on if the opportunity comes back our way.

“I have moments where it’s late at night and I can’t sleep and all of a sudden I’m thinking about those games and what we could’ve done differently. But it’s just moments.”

And now, on the eve of free agency and trade rumor season, Smart isn’t surprised to see his name splashed across social media as the most likely Celtic to be traded. At this stage for the 28-year-old point guard, it’s the unspoken part of his job description — the part beyond social media, anyway.

“At this point, I’ll be going into my ninth year. Every year my name is in the talks, and I’m still here. I’m still the longest tenured Celtic. So for me I take it as a compliment. It means you’re valued pretty high and if your name is talked about, people want you. But I don’t pay much attention. I know what I bring to the table, and that’s what I focus on, what I bring to this team. We’ll figure everything else out. Brad (Stevens) is great at what he does and he’s gonna figure out the right pieces to make sure we stay going in the right direction.”

Smart hasn’t taken much if any time for reflection. In addition to his annual basketball clinic in Flower Mound, Texas, and Westford’s New Mills complex — few if any other NBA players include a charge-taking drill in the curriculum — Smart has made two appearances in Las Vegas on behalf of Puma.

After sitting down to sign autographs and take pictures with a long line of campers — everyone from first graders to high school players attended — Smart said that it was one of those rare occasions when he could actually “sit down.”

Asked about Celtics coach Ime Udoka’s desire to get right back to the chase, including help on the recruiting front once free agency begins on June 30, Smart acknowledged that he’ll help in some capacity as well.