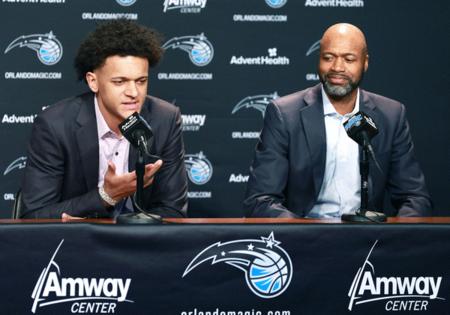 In the backdrop of the Orlando Magic’s draft-day choices, which included taking Paolo Banchero with the No. 1 pick, were questions about how their decisions would impact their short-term future.

Not just how the draft would affect who they did or did not pursue in free agency. Or whether Mo Bamba, the No. 6 pick in the 2018 draft who’ll be a restricted free agent, is more or less likely to return to Orlando.

But bigger-picture questions about what their approach to next season will be after finishing 2021-22 with the league’s second-worst record at 22-60.

Will the Magic fast-track their rebuild? Or will their approach be similar to last season when the main priority was developing their younger players?

“You guys know we didn’t do all the roster deconstruction we did so we can rush back to the middle,” president of basketball operations Jeff Weltman told reporters ahead of the draft. “That’s not what we’re trying to do. That said, there [are] a lot of different permutations to that. Right now, we want to play better basketball, make fewer mistakes, increase our IQ, build chemistry and continue to understand which of our players are going to impact winning.”

In other words, don’t expect the approach to next season to be significantly different from 2021-22.

There’s been a recent common trend among the teams who’ve been in the Magic’s position before drafting at No. 1.

Teams that won fewer than 30% of their games before drafting the top pick in the last 15 years typically made marginal improvements to their winning percentage the following season.