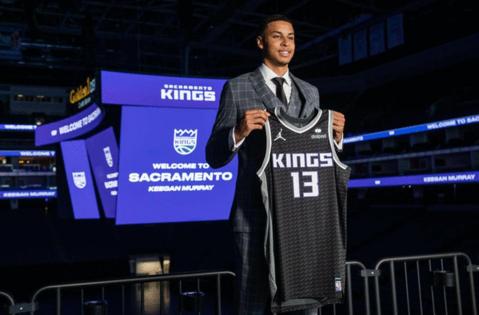 It was easy to see what the Kings saw in Murray, who hit all the right notes and checked all the right boxes following a whirlwind 48 hours that brought him to Sacramento as the No. 4 pick in the NBA draft.

“I’m excited to be here in Sacramento,” Murray said. “It’s a dream come true to be able to put on the purple and black, so I’m grateful to be in this position. Sacramento has welcomed me with open arms so far, so I’m excited to see everyone at the games and things like that. For me, it’s been a journey from where I came from to where I am now, so this is just the first step in my journey and I’m forever grateful to be in Sacramento.”

The leadup to the draft was packed with speculation that the Kings might draft Jaden Ivey or trade the pick to acquire veteran talent, but Murray had everything they were looking for. General manager Monte McNair said he wanted to add shooting, length and defense. Murray, a 21-year-old, 6-foot-8, 225-pound forward from Iowa, has all that and more.

“Keegan, the player, and Keegan, the person, is somebody that is the exact type of player that we want to bring into our system here,” McNair said. “On the court, both ends of the floor, up and down, versatile, somebody who can play in multiple different situations and succeed. And, as we also said, the person, the work ethic, the competitiveness, the humility, and everything we look for, so we’re excited to welcome him.”

McNair also extended a warm welcome to Murray’s parents, sister and girlfriend, who attended Saturday’s news conference and posed for pictures with Murray when it was over.

Murray’s father, Kenyon, received the Mr. Basketball state player of the year award at Central High School in Battle Creek, Michigan, before going to Iowa, where he finished 16th all-time in scoring and third in steals. He went on to play professionally in the CBA and IBL. He was runner-up for league MVP after averaging 25.0 points, 8.0 rebounds and 8.0 assists in 1998.

Kenyon Murray was recently named head coach of the girls’ basketball team at Prairie High School in Cedar Rapids, Iowa, where his daughter, McKenna, will be a junior this fall. He has also coached AAU, high school boys and men’s community college basketball. Both of his sons, Keegan and twin brother Kris, followed in his footsteps at Iowa. Keegan declared for the draft this year following a breakout sophomore season. Kris is projected as a potential first-round pick next season.

Keegan Murray was asked if it will be difficult to be away from his brother, with whom he shared the womb, the court, a car and living quarters for so many years.