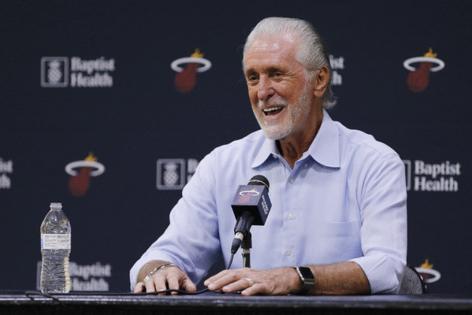 While the draft board has been rolled away from the practice court at FTX Arena, merely a temporary fixture, the league’s personnel board in Pat Riley’s office suite, with all of its movable nameplates, is a staple.

Those names, including many on Riley’s roster, are about to come into play.

Tuesday: This is when the Heat are scheduled to begin heading to the West Coast to set up a summer camp in advance of their summer leagues.

The Heat typically hold a rookie/free agent camp ahead of their summer-league opener, which this year is Saturday at the Golden State Warriors’ Chase Center.

Mychal Mulder, Javonte Smart, Haywood Highsmith and Omer Yurtseven are among those from this past season’s roster expected to participate in summer league for the Heat.

Wednesday: The Heat face four deadlines on this date, the deadlines to guarantee the $1.8 million 2022-23 salaries for Max Strus, Gabe Vincent and Yurtseven, as well as the deadline for P.J. Tucker to formally opt into free agency.

This also would have been the deadline for the Heat to extend a qualifying offer to Caleb Martin to make him a restricted free agent, which the team already has done.

The timing element is significant, with the Heat docked a second-round pick in last week’s draft for what the NBA perceived as jumping the gun in last year’s free-agency negotiations with Kyle Lowry. As a recidivist the penalty likely would be more severe.