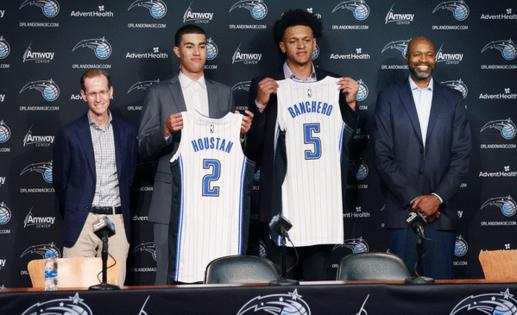 That’s especially because the 19-year-old was surrounded by uncertainty until moments before NBA commissioner Adam Silver took the draft stage at Barclays Center in New York City.

The Magic, who’ve taken pride in being one of the league’s more tight-lipped organizations, kept the secret about whom they were going to take with the top pick so well that even Banchero wasn’t sure he’d be selected No. 1.

Banchero knew he had a chance.

But he said it wasn’t until his agent Mike Miller, the former NBA player the Magic drafted with the No. 5 pick out of the University of Florida in 2000, told him “congratulations” 30 seconds before Silver took the stage that Banchero knew he’d be the top pick.

“[Miller] was just telling me to stay ready and be prepared,” Banchero said. “It happened pretty fast. … It probably took me 20-30 minutes to really calm down. I was just so filled with emotions.”

The whirlwind didn’t stop there.

Interviews with national media outlets occurred between Thursday night and Friday morning before Banchero took a flight for Orlando.

It was when Banchero was alongside Caleb Houstan, whom the Magic drafted at No. 32, coach Jamahl Mosley and president of basketball operations Jeff Weltman on Friday afternoon inside the Magic’s interview room at Amway Center that the magnitude of the recent hours began to resonate.

“I’d say landing here is when it kind of really hit me,” Banchero said, “that I’m part of the Magic and that I was the No. 1 pick.”