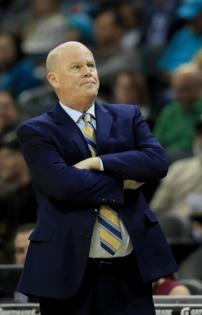 Moving swiftly after Kenny Atkinson spurned them to remain an assistant coach for Golden State last week, the Hornets agreed to terms with Steve Clifford on a multiyear deal to be the team’s 12th head coach in franchise history. League sources with direct knowledge confirmed to The Charlotte Observer on Friday.

The Observer reported Friday morning that Clifford was a serious candidate after he met with general manager Mitch Kupchak and owner Michael Jordan earlier in the week. Mike D’Antoni, who was a runner-up for the job when the Hornets ultimately decided to go with Atkinson, also had an in-person conversation with Jordan, league sources told The Observer. In the end, they went with Clifford and he will be introduced at a press conference sometime early next week.

Clifford returns to the place where served as the head coach from 2013-2018, guiding the Hornets to a pair of playoff appearances in his tenure. He finished his stint with a 196-214 record before he got fired in 2018 when the Hornets’ shifted things in their front office and hired Kupchak.

Clifford replaces James Borrego, the person who took over for him after he was let go. Borrego was fired in April after four seasons in part because of the Hornets’ rough losses in the play-in tournament in successive seasons.

In eight seasons as an NBA head coach, including 2018-2021 with the Orlando Magic, Clifford is 292-345. He spent this past season as a coaching consultant for the Brooklyn Nets.

With the Hornets, Clifford is expected to employ the same kind of uptempo offense that propelled LaMelo Ball to an All-Star campaign in his second season. The Hornets’ roster is constructed much differently than it was during Clifford’s first tour with the franchise, when they didn’t have many offensive weapons outside of Kemba Walker, and Clifford intends on taking advantage of those strengths.

The familiarity with Clifford, 60, is partially what led the Hornets to tab him as their head coach again. He remained on good terms with Jordan and even Kupchak despite his dismissal and that helped in bringing him back on board. He should transition into the position rapidly, which is a necessity with the offseason already underway and free agency arriving next week.

Earlier Friday following the Hornets’ introductory press conference for draft picks Mark Williams and Bryce McGowens, Kupchak spoke about the need to have someone in place by, at minimum, when summer league action tips off in two weeks. It’s particularly important for the next coach to quickly become acclimated with his new roster, including the Hornets’ young core.

“Hopefully, getting the coach to Vegas so he could make some judgments as to how much they’ve improved,” Kupchak said, “and the coach (can begin) building relationships with the players. So that when the fall comes around we are not starting the process. We are already through the process and now it’s just about training camp and hopefully staying healthy and playing ball.”