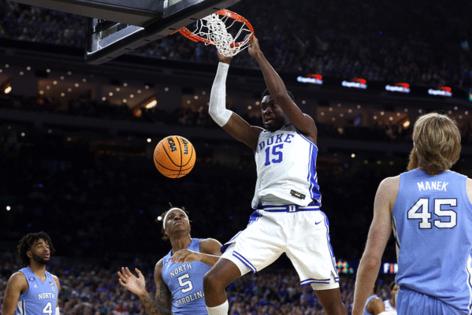 Immediately after making the pick, though, Charlotte traded the 6-foot-11, 250-pound big man to New York, a source confirmed to The Charlotte Observer, before the Knicks moved him to Detroit.

With the No. 15 pick, the Hornets drafted Mark Williams from Duke.

Coming into the draft, there was chatter indicating the Hornets were looking to be active in the trade market.

One report even suggested they were trying to package one or both picks with Gordon Hayward to shed his salary and give them some cap relief. Hayward, who has played in a combined 93 games in his two seasons in Charlotte, has two years and $61.5 million remaining on the four-year, $120 million contract he inked prior to the 2020-21 season.

Moving Hayward’s deal would give them financial flexibility, but it won’t be easy due to many teams not possessing a ton of cap space this offseason.

The American arrived at Sheremetyevo airport outside Moscow and was arrested after a luggage search found vape cartridges containing cannabis oil that was prescribed by a U.S. doctor to treat chronic pain. There were ...Read More

LAS VEGAS — The Aces will enter Thursday’s showdown with the No. 1 seed Chicago Sky and probably the first round of the playoffs shorthanded.

For instance, if you knew that one of your chief conference rivals was attempting to trade ...Read More

NEW YORK — A new team has joined the Kevin Durant sweepstakes, and it’s the same team that pried away another Nets superstar.