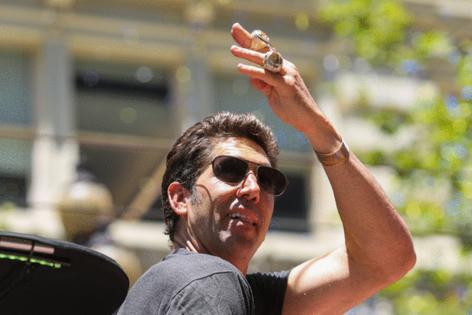 Warriors general manager Bob Myers had his bare feet on the famed parquet floor of the TD Garden in Boston.

Champions can do such a thing.

I spotted Myers from across the court, following the Warriors’ Game 6 win in the 2022 NBA Finals, their fourth championship win in eight years. I had to make a comment on his giddy-up. He was wearing a t-shirt and running shorts, and again, no shoes. Sitting on the Warriors’ bench, talking to another reporter, he was holding a golden chalice and a champagne bottle that was filled with Michelob Ultra.

And yet, in that moment of ultimate satisfaction, his mind went elsewhere:

It was less than a week away.

The Warriors have a ton of practice at drafting amid the celebration of winning a title. During the peak dynastic years, they once held a draft workout the morning of their parade in Oakland. (Maybe that’s why they drafted Jacob Evans…)

And Myers couldn’t help but laugh at the circumstance. This was a champagne problem — or perhaps a Michelob Ultra problem — but a problem nevertheless. Other teams have been focusing on the draft for weeks, if not months. There are plenty of folks working on the draft for the Warriors year-round, but the Dubs would only have a few days where the whole front office and coaching staff’s heads would be put together on the same thing.

And let’s be real, some of those heads would be nursing hangovers.

So Myers put it to me, right there on the floor in Boston: “Who would you draft?”

I want to say something about Brittney Griner, but I don’t know what to say.

I don’t know what there is to say, what I can say that hasn’t been said — and what matter will anything I say will make anyway?

Among the nuances of the Miami Heat’s early agreements in NBA free agency are a pair of restrictions on the one-year, $11 million contract with guard Victor Oladipo.

While Oladipo’s salary could work in eventual trade...Read More

Looking to address a lack of 3-point shooting, the Chicago Bulls are set to sign veteran guard Goran Dragić to a one-year deal, according to a report by The Athletic.

The deal is worth a reported $2.9 million as the ...Read More

The notion of “trading a draft” dates back to a moment either of infamy or genius on Oct. 12, 1989, depending on where the focus of the deal rests.

And, no, for all the NBA’s wheeling and dealing, including Danny ...Read More

PHILADELPHIA — A question is now answered. Jalen Brunson’s NBA worth is not that of a second-round draft choice, but of a player worthy of a four-year contract for $104 million, making him the new centerpiece of the ...Read More

ATLANTA — The guess is that the Hawks aren’t done. They did well in the draft, landing AJ Griffin with a non-lottery pick. They traded for All-Star guard Dejounte Murray at a cost of Danilo Gallinari, who couldn’t ...Read More