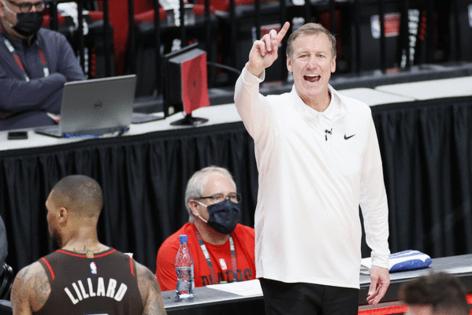 LOS ANGELES — Former Portland head coach Terry Stotts became the first candidate to meet with the Lakers in person Tuesday as the organization ramps up its search to replace Frank Vogel, sources confirmed to the Los Angeles Times.

All three are considered serious candidates for the coaching vacancy in Charlotte, as well.

Stotts, a veteran coach who began his career on the sidelines of the Continental Basketball Association, led Portland to the Western Conference finals during a stretch of eight straight playoff berths with the Trail Blazers before being replaced by Chauncey Billups after the 2020-21 season.

Stotts was also a head coach in Atlanta and Milwaukee.

According to sources, Stotts was asked previously if he would have interest in joining the Lakers as an assistant should he not be hired as a head coach. Stotts, sources said, told the team that he has no interest in a role as a lead assistant.

Stotts was approached about joining Frank Vogel in that role last season on the Lakers' bench and also declined, sources said.

The first thing Trevor Noah said to Draymond Green when the big-talking Warriors star came on to The Daily Show was what so many have wondered.

“I’m shocked that you have time to do anything after winning your fourth ...Read More

SEATTLE — The Storm finalized a deal with Tina Charles and is adding the eight-time WNBA All-Star center for the second half of the season as the team ramps up for a playoff push.

LOS ANGELES — The Clippers and center Ivica Zubac have agreed to terms on a three-year, $33 million deal that has no options, according to people familiar with the negotiations but not authorized to speak publicly.

It’s obvious why the Hawks are seeking a trade for Spurs guard Dejounte Murray. He would be a great fit next to point guard Trae Young. The Hawks need good defenders, especially on the perimeter, and Murray checks that ...Read More

According to an NBA source familiar with the situation, the Miami Heat are willing to extend a fully guaranteed contract for the maximum-allowable three years to free-agent power forward P.J. Tucker.