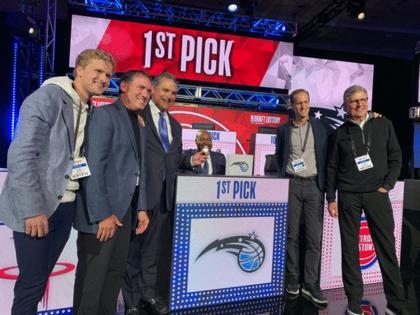 He was talking about the Florida Panthers’ second-round matchup against the Tampa Bay Lightning, the two-time-defending Stanley Cup champions. And he recognized an intrastate rivalry percolating because of the Panthers’ rise to contender status.

The day after Haslem’s forecast, ahead of what turned into 0-2 direness for his adopted Panthers, another intrastate rivalry received a jolt, with the Orlando Magic winning the NBA lottery, the first pick in the June 23 draft now theirs.

That, of course, is a big deal.

And the Magic certainly have done big things with such selections before, turning previous No. 1 selections into Shaquille O’Neal, Penny Hardaway (through trade) and Dwight Howard.

The Heat, by contrast, with the notable exception of Dwyane Wade, largely have created their success through free agency or trades, including LeBron James, Chris Bosh, Jimmy Butler, and, yes, Shaq.

Yet where the two Florida franchises have never converged is a playoff series of heft. When the Magic were up, the Heat were down, and vice versa, with this season as the latest evidence.

In the Heat’s 34 seasons, they have faced the Magic in the playoffs once, winning in the best-of-five 1997 first round.

Otherwise, for all the bluster of former Magic executive Pat Williams at the franchises’ inceptions, not much.

With the move that had been anticipated, Tucker formally bypassed the $7 million player ...Read More

In addition to Calhoun and ...Read More