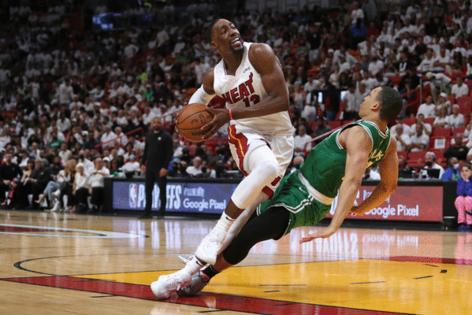 BOSTON — Another file has been added to Bam Adebayo’s motivation folder.

And, yes, the Miami Heat center is keeping score, while also appreciating that the most important scores are the ones at the ends of each game in these Eastern Conference finals.

Hours after being relegated to the NBA All-Defensive second team, Adebayo spoke ahead of Saturday night’s Game 3 against the Boston Celtics about a different type of one-point decision.

“I appreciated it,” he said, “but like I’ve said, I always feel like I deserve to be first-team. So that’s what it is.”

After consecutive years of being second-team All-Defense, Friday night’s release of the balloting for the 2022 All-Defensive teams showed Adebayo one vote from the 100-member media panel from being part of the first team.

In the weighted system, Adebayo would have tied the Memphis Grizzlies’ Jaren Jackson Jr. for the final first-team spot with one additional second-team vote, and would have supplanted him with an additional first-team vote. As it is, Adebayo received 57 first-place votes to 55 for Jackson in the balloting that was completed before the start of the playoffs.

“Doesn’t matter,” Adebayo said of being on the cusp of the first first-team selection of his five-year career, “because I’m still second team. I’ve got to live with that.”

What it will do, he said, was continue to fuel his fire, noting that he has learned from Heat captain Udonis Haslem to turn slights into success.

“I mean, I’ve tried everything,” he said. “I’m like UD. We find stuff to get mad at. So that’s basically what it is.”

But, Adebayo said, the three consecutive second-team nods means he is a constant in the conversation.