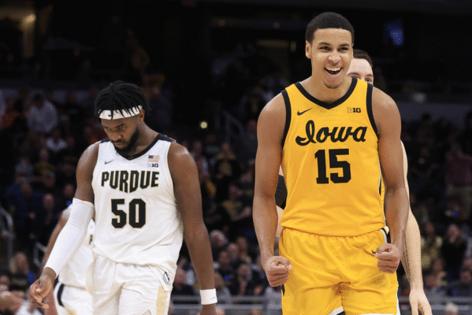 CHICAGO — Keegan Murray is used to being doubted.

Shoot, he’s not entirely unsure he hasn’t been part of the crowd casting the doubt.

So, the notion the All-America selection from Iowa is on the verge of being a lottery pick in next month’s NBA draft might have seemed a tad farfetched at one point.

“If you told me three years (ago) I’d be in this position, I'd kind of smirk at you and laugh,” Murray said from the NBA combine on Thursday. “So, for me, I'm just honored and grateful.”

Of course, any lingering doubt of Murray’s game has all but disappeared, thanks to a breakout sophomore season at Iowa, when the 6-foot-8 forward earned All-America honors, was up for nearly every award for national player of the year and almost singlehandedly led the Hawkeyes to the Big Ten tournament championship, scoring a record 103 points in four tournament games.

Emerging from the shadows of former teammate and current Pistons big man Luka Garza, Murray averaged 23.5 points and 8.7 rebounds a game for the Hawkeyes, establishing program records in points (822) and field goals made (307). He also became only the second player in Division I history to amass more than 800 points, 60 blocks and 60 3-pointers in a single season, joining Kevin Durant, who did it at Texas in 2007.

Not bad for a guy who had one Division I scholarship offer coming out of high school in Cedar Rapids and headed to Florida with his twin brother, Kris, for a year at a prep school before landing a scholarship at Iowa, a place he was once mistaken as a walk-on when he first arrived.

Late or not, Murray — who left Iowa after his sophomore season — is projected to go in the top 10 and is lining up to be an attractive option for the Pistons, who have the No. 5 pick after dropping in Tuesday’s NBA draft lottery.

Slipping a couple of spots was a blow to some, but general manager Troy Weaver is confident there is plenty of value where the Pistons are picking. And while dynamic, athletic guards like Purdue’s Jaden Ivey, Kentucky’s Shaedon Sharpe and Arizona’s Ben Mathurin could pair well with Cade Cunningham, who was just named to the NBA’s All-Rookie first team, a wing with Murray’s skill could be the way to go.

A smooth, efficient scorer, Murray went from a role player at Iowa as a freshman to a star a year later, thanks to plenty of hard work in the offseason and a new mindset, a shift that was necessary when Garza, the national player of the year, was selected in the second round by the Pistons.

“My mentality flipped,” Murray said. “I knew that I would have the ball in my hands more and I had to take that for what it was worth. Going into the offseason, I had to be comfortable with the ball in my hands, use my skill set and find different ways to score the ball that was not just plays, but offensive rebounds, put-backs, run the floor in transition.

“So for me, it was getting in the best shape possible and also flipping my mindset to where I knew I was the best player on the court, whenever I stepped on the court.”

It’s a mindset Murray is ready to take to the NBA, where some believe his age — he’ll turn 22 when next season begins — means he might have reached his full potential, making him a safe pick, if not the pick that could turn into a superstar.

“I feel like my ceiling is as high as anyone because I'm a late bloomer,” Murray said. “I feel like I haven't really grown into my body just yet. You could see the progress from when I was in prep school to my freshman year to my sophomore year. I’ve still been continuing to work on my body, still adding weight and things like that.

“So, for me, like I said, I'm a 21-year-old in an 18-year-old’s body. I’m still working on my body and I feel like my ceiling is higher than anyone else in the draft.”

“I've had interviews with them,” Murray said. “Talking with them, it's been going well. So for me, it's just putting my best foot forward in the interview process. With any team, I'm just trying to build great relationships with all teams that I meet with and cross paths with.”

Perhaps that leads Murray to Detroit — a place he’s not completely unfamiliar with. After all, his father, Kenyon, was Michigan’s Mr. Basketball at Battle Creek Central in 1992 and Murray still visits family in Michigan on a regular basis.

Wherever he lands, though, Murray will likely continue to squash any doubt and enjoy every step.

“I love the game of basketball,” Murray said. “I've always loved it. And it's crazy how a little round ball that you shoot through a hoop, how far that can take you in life. So, for me, I just love the game and love that my family is with me through every step of the way.”

MINNEAPOLIS — Sylvia Fowles will play in what might be her second-to-last home game on Sunday night at Target Center.

If they offer her a farewell gift, she should reprise her career and swat it into the second row.

SEATTLE — A 21-year journey that began when the Storm selected Sue Bird with the No. 1 overall pick in the 2002 WNBA draft has finally led her here, to the eve of her last regular-season game in Seattle.

How do you say ...Read More

LOS ANGELES — One online sponsorship platform aims to close the pay gap in sports with one sponsored Instagram post at a time.

Parity, founded in 2020, pairs female athletes with brands and puts money in the pockets of ...Read More

Even as Duncan Robinson’s future with the Miami Heat remains somewhat murky amid an offseason of trade rumors, the 3-point specialist has cleared the air.

And for that aspect of his personal growth he credits former ...Read More