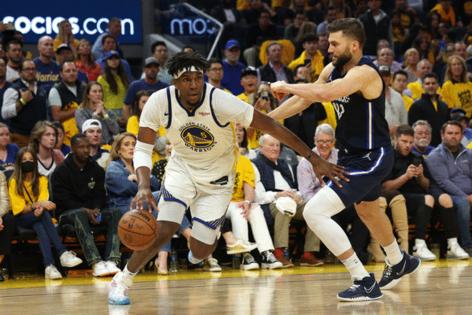 SAN FRANCISCO — The gold-clad crowd at Chase Center started to chant “M-V-P” in the third quarter of Game 2 of the Western Conference finals Friday night.

But it wasn’t Stephen Curry stepping up to the free-throw line.

The cheers were for Kevon Looney, who played harder than arguably any player on the court in the Warriors’ 126-117 comeback win over the Mavericks that gave them a 2-0 series lead.

Looney once again came up big for the Warriors against the undersized Mavericks. He scored 11 of his career-high 21 points in the third quarter to help the Warriors come back from a 14-point deficit at the half. That included a dunk at the buzzer to end the third to pull the Warriors within two points.

He also grabbed eight of his 12 rebounds in the second half. He recorded his second career postseason double-double and first of this playoffs.

Looney’s impressive second-half performance was much needed, with the Warriors playing most of the final two quarters without Draymond Green who was in foul trouble after picking up his fifth early in the third quarter. Green ultimately fouled out with 2:25 left in the fourth.

Otto Porter Jr. made a 3-pointer to open the fourth quarter, which gave the Warriors their first lead of the game, and Curry and Jordan Poole took off from there. Curry scored 10 points and Poole added 12 in the fourth quarter, during which Golden State outscored the Mavericks 40-32.

The first half was littered with ugly turnovers for the Warriors, which the Mavericks capitalized on.

Dallas pulled out to a 16-point lead in the first quarter, which the Warriors cut down to three thanks to a 13-0 run led by Curry, who had 20 points at the half.

The Mavericks had another run, which gave them a 19-point advantage in the second quarter, making this the Warriors’ third-largest comeback playoff victory in the last 20 years.