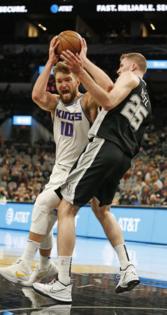 NEW YORK — The Sacramento Kings had better not mess this up.

When the Kings leapfrogged the draft order in Tuesday’s NBA draft lottery, the dark cloud hovering about the city’s Golden 1 Center lifted, at least for a moment, as the team secured its best chance at ending a 16-year playoff drought.

The basketball gods agreed and saw to it that the Kings’ 7.5% chance to move up in the draft would pan out: Sacramento lucked out and now owns pick No. 4, behind Orlando, Oklahoma City and Houston.

But assuming Duke’s Paolo Banchero, Gonzaga’s Chet Holmgren and Auburn’s Jabari Smith are all off the board at pick No. 4, the Kings’ best move is to trade their first-rounder for a star-level player, of which there should be many available this summer.

That’s because the time for developing young players in Sacramento has passed, and the Kings let us know they’re here to win now when they made the unpopular decision to trade second-year guard Tyrese Haliburton to the Indiana Pacers, along with Buddy Hield, for All-Star big man Domantas Sabonis.

Not to mention that was their biggest stipulation, according to ESPN, in their hiring of Mike Brown as head coach: Bring the city of Sacramento’s 16-year playoff drought to an end.

With Walton out, Brown in, and both Sabonis and De’Aaron Fox leading the charge, the table is set for the Kings to make their most competitive playoff push in more than a decade

But that’s only on the table if they don’t muck this up by contradicting their win-now edict with a move that adds a young, inexperienced, in-need-of-development talent to a team that wants to compete in meaningful basketball games. The Kings are not the Warriors, a team with veteran stars and a ready-made infrastructure built to incorporate a James Wiseman or a Jonathan Kuminga into a championship system.

They are a team that’s a piece away from competing for their first playoff spot in nearly two decades, and they should treat their draft pick as their biggest bargaining chip in order to obtain that player this summer.

Some ideas include trading pick No. 4:

— to Washington in a deal for Bradley Beal

— to Chicago in a deal for DeMar DeRozan

Spurs should make a run at Ayton

The Spurs are one of five teams projected to have more than $20M in cap space to sign free agents this summer and can create even more space by shedding some contracts to sign Ayton to a full four-year max worth $131M.

The fit makes sense on almost every level: Gregg Popovich has thrived with skilled offensive big men at his disposal — think David Robinson, Tim Duncan, LaMarcus Aldridge and, to a lesser extent, Pau Gasol — and a talented five could jumpstart the Spurs, who already have answers at the one and three in Dejounte Murray and Devin Vassell, respectively.

Ayton, however, is a restricted free agent, which means even if he’s heartbroken from Phoenix’s decision not to give him a contract extension last summer (while giving Mikal Bridges one at the same time), and even if he’s at odds with head coach Monty Williams for barely playing him in the second half of their 40-point blowout in Game 7, the Suns can still match any competing offer sheet he signs this summer and keep him in Phoenix.

Unless, of course, Ayton signs the qualifying offer — a one-year deal worth, in Ayton’s case, $16.4M that would make him an unrestricted free agent free to sign anywhere in the summer of 2023.

The Suns made Ayton prove his worth by not giving him an extension last offseason. Ayton could flip the script and make Phoenix prove itself a worthy home for the next four years of his career.

Given the way things ended — a 40-point deficit in a Game 7 loss on their own home floor, with Ayton watching from the sidelines while his team flailed helplessly — it’s fair to wonder if things have fractured beyond repair, and if so, there might not be a better fit in all of basketball than Ayton to the Spurs.

When the Charlotte Hornets found a franchise player in LaMelo Ball at pick No. 3 in the 2020 NBA draft, the first thing they did was go out and sign Gordon Hayward to a four-year deal.

Which is exactly what the Orlando Magic, winners of Tuesday’s draft lottery and new owners of the No. 1 overall pick, need to do — not sign the oft-injured Hayward but a player of his stature to signal to both their young players and their fan base that the time for losing has come to an end.

Injuries derailed the Hayward deal (and who possibly could have seen that coming?), but the move still served its purpose. With a franchise handing the keys to kingdom over to Ball, the Hayward signing showed their superstar talent that this team is all-in on winning – and winning now.

The Magic need to strike while the iron is hot and declare their rebuild via youth movement officially over. The way to do that is by packaging some of their ancillary pieces in a deal for a B-level star to support the franchise player they’re set to take in June.

Kevin Durant has given Nets owner Joe Tsai an ultimatum: Tsai must decide between Durant, a 12-time All-Star universally regarded as one of the best basketball players in NBA history, and the pair of Brooklyn’s general ...Read More