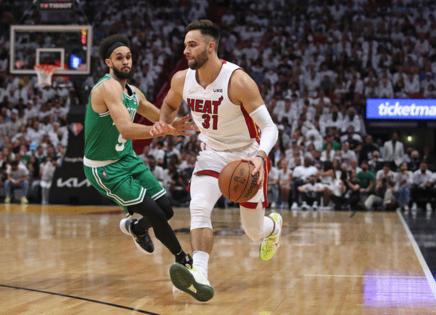 MIAMI — This is the revenge, the opportunity for Max Strus to settle the score, to prove the Boston Celtics wrong, to make Brad Stevens wish he never issued that pink slip.

“No,” Strus said to the Sun Sentinel during a private moment outside the Miami Heat locker room at FTX Arena. “This isn’t about me. This is bigger than me. It’s the Eastern Conference finals. There’s no personal vendettas here. We’re just trying to win a series.”

The difference is one team gave up on Strus at the start of his NBA career while the other saw so much potential that it signed Strus a year after a devastating 2019 knee injury.

“I had no idea Max played for the Celtics,” Heat center Bam Adebayo said. “I didn’t.”

Signed by Boston during the 2019 offseason after going undrafted out of DePaul, Strus thrived with the Celtics in summer league and then made it to the final preseason cut. But on the eve of the regular season, Strus was released in favor of Javonte Green, another undrafted prospect.

The formal notice of his Celtics release came from former Celtics executive Danny Ainge. There also was a parting moment with Stevens, who then was Celtics coach and now oversees Boston’s front office.

“Danny said it was a hard decision to make,” Strus said. “And I met with Brad, too, and he said the same thing. So it happens. It’s part of the business.”